For nearly six years, barbecue specialist Gerrick DeVane was a fixture at the Short Stop Food Mart on East 10th Street and North Smith Road, with crowds filling the parking lot each Thursday to line up for the BBQ Train. Now at the helm of his own operation, Gerrick’s BBQ, DeVane is seeking to market his product independently, with an emphasis on catering parties, events, and weddings.

His hickory-smoked, dry-rubbed pork, beef, and chicken, however, will be available for sale each Thursday at the Convenient Food Mart, at East 17th and North Dunn streets, providing “a catalyst to get people familiar with our product,” DeVane says. “But catering will be the mainstay.”

In addition to the usual grilled fare, Gerrick’s BBQ will feature salmon, lamb, and venison.

The split with the BBQ Train, DeVane stresses, was amicable. “I left on wonderful terms,” he says. “I am still in contact with the people there. I think it is a win-win situation.”

It won’t be the first change of location for DeVane, who’s plied his trade “here, there, and everywhere,” including Oklahoma City, Oklahoma; Washington, D.C.; and Fairbanks, Alaska.

His travels gave him “a sampling of what food is like across the country,” he says, but he has always called Bloomington home. Born and raised here, DeVane attended Bloomington High School North, and then Fairfield University in Connecticut, where he played both basketball and baseball.

The DeVane name is well known in Bloomington. His father, Gene, was a top Cook Inc. executive who piloted his own plane on assignments around the country. His mother, Gladys, is an actress and educator who was honored in 2012 by the City of Bloomington as a Black History Month Living Legend and by the Bloomington Commission on the Status of Women with a Lifetime Contribution Award.

Gerrick, though, credits his culinary influence to his grandmothers — both still around at ages 97 and 107. “They always cooked with natural ingredients, tried not to buy anything canned or preserved, and at a young age I appreciated that a meal was an event in itself — a grand procedure that ultimately culminated in everyone having a good time.” Not a bad recipe for a caterer. 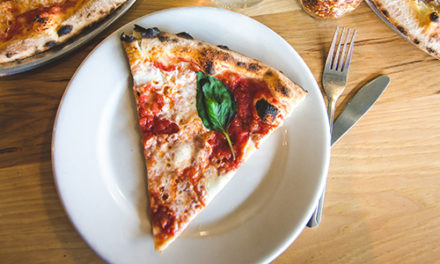