In the heat of June, experienced stone carvers, hobbyists, and carving novices painstakingly shape blocks of limestone weighing up to 1,200 pounds into creations from their own imaginations, toiling away on the grounds of the Bybee Stone Company in Ellettsville, Indiana. This is the 20th year artists from around the corner and around the country have gathered here for the Indiana Limestone Symposium.

“We want people to know they only have to have the desire to learn and try limestone carving,” says Amy Brier, Bloomington stone sculptor and symposium co-founder. “They don’t need artistic ability. No one has left unhappy or with an unrealized project.”

Other stone symposia exist on the East and West Coasts, but Brier says the Limestone Symposium is unique because it’s focused on one type of stone and is the only symposium in the Midwest.

“This has been my baby,” says Brier, an associate instructor of fine arts at Ivy Tech Community College–Bloomington. “I studied abroad in Italy years ago and fell in love with stone and carving through a great teacher.” She and her co-founder, sculptor Frank Young, developed the symposium to teach and share the tradition of carving limestone.

Experienced carvers, who work with pneumatic tools, can sign up for one or two seven-day sessions, June 5-11 and 18–25, for $800 per session. Some 25 people typically attend sessions with instruction on design, moving stone, splitting blocks, roughing out, and using tools.

Richard Linnemeier, 64, a retired dentist in Bloomington, had no experience with carving when he first signed up in 2012. His original intent was to help Arden Place residents build stone signs for their neighborhood.

But, he says, he got “the bug” to carve. “I did nothing but carving on little tiny teeth for 26 years,” he says. “Picking up a pneumatic drill was something I was familiar with, but now it’s on a greater scale. I enjoyed it so much.”

For Linnemeier, the carving process is just as gratifying as producing the finished piece. He’s made an immense square knot, an ornamental pond frog, and a huge replica of his hand, now sitting in his yard. He encourages anyone intrigued by carving to try it for a day.

“If you make mistakes, you can act like it was the plan all along. We get filthy dirty. It’s hot and sweaty. But we shower up and do it the next day,” says Linnemeier, who will attend again this June.

“I’m not a fantastic artist,” he says. “But it doesn’t matter what the artwork looks like, it’s how you feel when you are doing it.”

For more information or to sign up for the symposium, visit limestonesymposium.org. 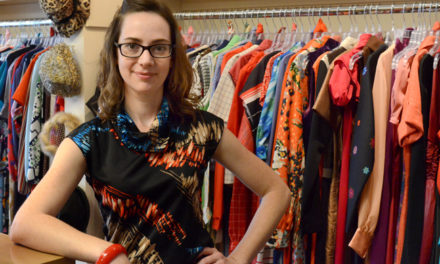