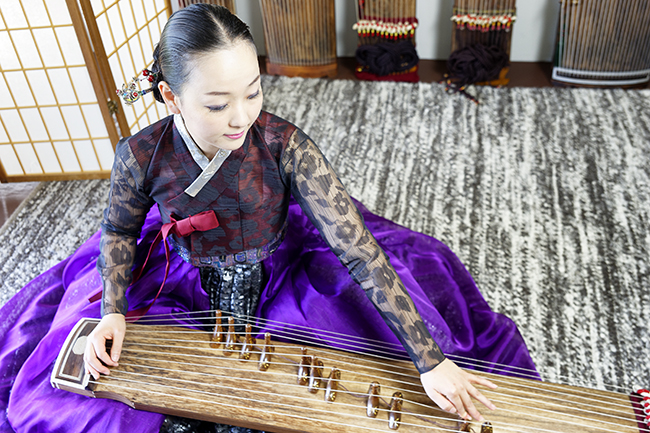 On a small basement stage in her southeast Bloomington home, Eun-Sun Jung draws a haunting melody from an exotic, zither-like instrument. Called a gayageum, it was invented at least 1,000 years ago to entertain Korean nobles. Jung plucks its 12 strings gently while bending notes with her left hand.

Jung, 31, grew up in Seoul, South Korea, started playing the gayageum at age 10, and attended South Korea’s premier school for learning gugak (traditional Korean music). She has performed in Europe and Japan, as well as the United States, where she has played at prestigious venues such as the John F. Kennedy Center for the Performing Arts in Washington, D.C., the Philadelphia Museum of Art, and Symphony Space in Manhattan. An award-winning musician who has recorded three CDs, Jung has explored moving beyond traditional Korean music, blending it with Western styles in collaboration with folk and jazz artists.

She moved to the U.S. in 2011 when her husband, M.K. Chin, was studying for his Ph.D. at Pennsylvania State University. The couple moved to Bloomington in 2014 when Chin joined the Indiana University Kelley School of Business faculty. At first preoccupied with raising their two young sons, Jung has begun to expand her efforts to promote Korean culture and music in Bloomington.

She taught her first local workshop through the IU East Asian Studies Center in the spring of 2016, offering beginning instruction on the gayageum to seven students. “At the end of the workshop, we played together here in recital,” Jung says. In the fall, she will teach the workshop again, as well as an intermediate class for students from her spring workshop.

She has also played at IU’s Korean Night, held in October and sponsored by the East Asian Studies Center, in 2014 and 2015 and is scheduled to play again this year.

The standard gayageum has 12 strings, ideal for traditional Korean music, which is based on five tones. But she also plays modern 18- and 25-stringed versions, better suited for Western melodies. And she owns a small gayageum designed for children. “In my workshop, we had one kid about 7 years old,” Jung says.

Contact the East Asian Studies Center for information about Korean Night or Jung’s workshops at easc@indiana.edu or 812-855-3765.