Editor’s note: Due to COVID-19, the Limestone Comedy Festival has been rescheduled for September 17–19, 2020.

Saturday Night Live’s Chris Redd will headline shows at this year’s Limestone Comedy Festival, to be staged at several downtown venues May 28–30. Other headliners include Jacqueline Novak and Jimmy Pardo.

“We aim for the top 5% of comics for the festival,” says Jared Thompson, owner of The Comedy Attic and festival co-founder and co-director. “We’re able to attract big-ticket and superstar comedians because Bloomington is a great comedy town.”

Novak and Pardo are examples of the quality of performers the festival brings to town.

Besides doing stand-up, Novak has performed her own off- Broadway one-woman show, Get on Your Knees, which won places on two New York Times lists: Best Theater of 2019 and Best Comedy of 2019. She’s also performed her own Comedy Central special and appeared regularly on Late Night with Seth Meyers and The Tonight Show Starring Jimmy Fallon. Pardo was the warmup comedian
and a cast member on Conan for five years, has hosted the award- winning podcast Never Not Funny since 2006, and has released a comedy album.

Thompson and Bloomington-based comedian Mat Alano- Martin launched the first comedy festival in 2013, just a few months after Amy Schumer, a Comedy Attic alum, was quoted in USA Today naming The Comedy Attic one of the top 10 comedy clubs in the country.

Alano-Martin brought the idea to Thompson, along with his experience as a touring and festival comic. “He knew things festivals were lacking in,” Thompson says. “He said this would be a good experience for comedians because all the venues are within a block and a half of each other, and argued that, though we don’t have the population here, if we got good comedians, people would come.” After a few more conversations, he was sold.

“Mat and I are definitely a good team,” Thompson says, adding, “This is the most noted comedy festival in the Midwest.”

For more information, including tickets and scheduling, visit limestonefest.com. 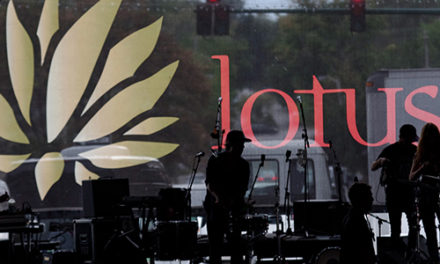