The Bloomington Fashion Collective Wants You! Most Bloomingtonians are aware that the downtown is flush with one-of-a-kind restaurants and thus a destination for dining out. But when was the last time you headed downtown for an afternoon of shopping?

If you can’t remember, the new Bloomington Fashion Collective wants to change that. What started as a dozen store owners meeting in March has blossomed into a coalition of more than 30 downtown businesses. Their goal: to lure shoppers away from the mall and big-box stores and into the indie shops that make Bloomington unique.

“BIRA, the local independent restaurants association, has really done a great job making this a lively downtown for restaurants,” says Michael Waterford, a buyer at JL Waters & Company, who has been instrumental in getting the fashion collective off the ground. “We aim to do the same for retail.”

The Bloomington Fashion Collective is made up of not just stores that sell clothing like Willow & Rose and Relish, but also salons, antique shops, and other fashion-related businesses. The group’s first big event was a sidewalk sale on July 12, for which all member businesses moved items outside and marked down prices. “Hopefully,” says Waterford, “the event will grow into something that’s as big a deal as Taste of Bloomington — one of those events that draws people downtown and makes them aware of what we have to offer.”

Right now, Downtown Bloomington Inc. lists 22 member restaurants and only 11 apparel and specialty stores. “Recently restaurants have been taking over the downtown, so we see this as an opportunity to highlight the retail shops,” says Waterford.

As for what’s next? Anything that promotes Bloomington’s retail scene, with an emphasis on downtown, Waterford says. “We know Bloomington is like Indiana’s culture hub,” he adds. “We see ourselves as different and odd and weird, and we love that, and we want to make people aware that that weirdness is what gives us our uniqueness and makes us desirable as a destination.”

By banding together, the members of the Bloomington Fashion Collective hope to find strength in numbers, says Waterford. “The whole end goal is to reinforce the vitality of downtown Bloomington and do that through partnerships, not competition.” 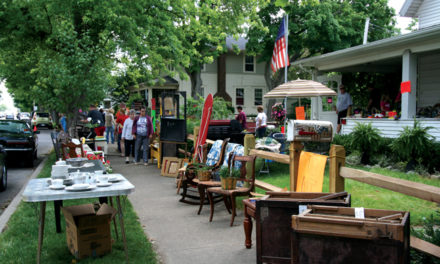 Fabtastic! The Yard Sale to Top All Yard Sales