Public radio fans know Bloomington’s WFIU offers classical music and jazz, as well as informational and news programming. What they may not realize is that many of the local programs they enjoy are broadcast nationwide.

“We’ve been active in syndication for twenty years, and dabbling in it for close to thirty,” says John Bailey, director of marketing and communication for WFIU.

One of the station’s longest-running syndicated programs is Harmonia, which features music from the Renaissance and early Baroque periods. Launched in 1991, the show began national syndication in 1995, with more than 80 stations signing on in the first week.

Night Lights, a weekly one-hour jazz program that debuted in 2004, is another locally produced music program reaching a national audience.

Earth Eats is an example of how new forms of technology can impact older formats like radio. Earth Eats started out as a website two years ago. Since then it has expanded to include Twitter feeds, a Facebook page, podcasts, and, eventually, the radio program. Bailey says Earth Eats’ Twitter following recently exceeded 50,000, ten times the number it had just one year ago.

Earth Eats producer Annie Corrigan thinks the program’s success is due to a fundamental need for human beings to connect with others to discuss topics of concern, and the ease with which the technology allows that to happen.

“We’re filling a hole in the market,” Corrigan says. “We’ve found there aren’t a lot of sites that focus on local, seasonal, and sustainable food in this way.”

Developing successful syndicated programming is a matter of being aware of those kinds of market factors, says Bailey.

“For example, you don’t want your programming to be hyper-local,” he says. “We’re a regional radio station and we try to be considerate of the other areas we serve. In syndication, that has translated well to the people who listen to us all over the world.” For the Love of Trains: A Series of Evocative Posters (Photo Gallery) 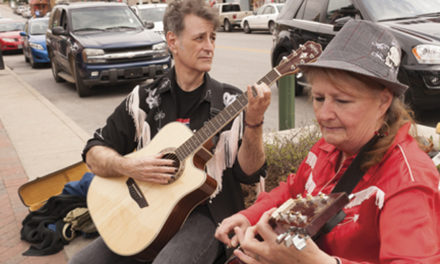