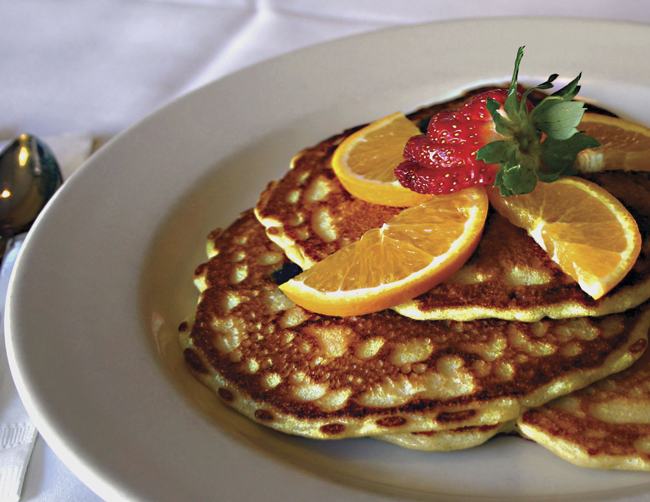 It was 1976, Bloomington, Indiana. The food scene was just heating up, and 26-year old Michael Cassady was in the thick of it, cooking at local haunts like the Gables, the Tao, and the Vienna Dog House, where he and his buddy Strats (Spyridon Stratigos) perfected the art of breakfast. It was a good time to be a chef, recalls Michael. Although “yogurt was still a kind of left-wing food at the time,” all that was about to change.

Part of the instrument of change was Michael himself, who walked into the tiny, 30-seat Key Hole Café on North Walnut one day and asked the owner if he was interested in selling.

Soon the Uptown Café was up and running and Michael was turning out omelets, Eggs Benedict, and truly wonderful home fries—great breakfasts made from scratch, served early ’til late.

Today the Uptown Café is in fancier digs. Located just off the south side of the Square since 1984, it’s a chic and jazzy American bistro specializing in the flavors that Michael loves best, the big, bold, vibrant essence of Louisiana’s Cajun and Creole cultures. The Uptown long ago added lunch and dinner to its repertoire—soups and salads and sandwiches and entrees like blackened fish, Chesapeake Bay jumbo crab cakes, sizzling steaks, pasta dishes, and gumbos of all kinds.

The food is not about pushing the edges of the culinary envelope, but rather about making old classics in a new way, making the upscale comfort foods people crave, with great flavor and heart. Michael has watched the Bloomington food world change dramatically since the Uptown’s early days and he is glad to see the influx of new restaurants, from white tablecloth to ethnic eateries. It takes the pressure off him. There’s no need to expand, he says, so he can keep on doing what he does, the way he loves to do it.

So it should not be surprising that it is breakfast, the Uptown’s original raison d’etre, that holds a special place in the hearts of its patrons and, indeed, in the heart of its chef and owner as well. “It’s my favorite still, and probably that comes through,” says Michael. “Breakfast hits the spot with people, hits that simple place in their soul.”

Whether it’s the ethereal cottage cheese pancakes, the Indonesian corn fritters, the crème brulee French toast, or the Eggs Benedict and omelets and home fries that still grace the menu, breakfast at the Uptown is a powerful draw for Bloomingtonians of all sorts. On any given morning you will find a congenial mix of local business personalities, city workers, students, IU faculty, and out-of-towners, all come to start the day with something delicious and comforting from Michael’s kitchen.

“I think people go to breakfast at the Uptown the way they put a quarter in the jukebox to play their favorite song. At least I hope they do,” says its owner. Play it again, Michael.