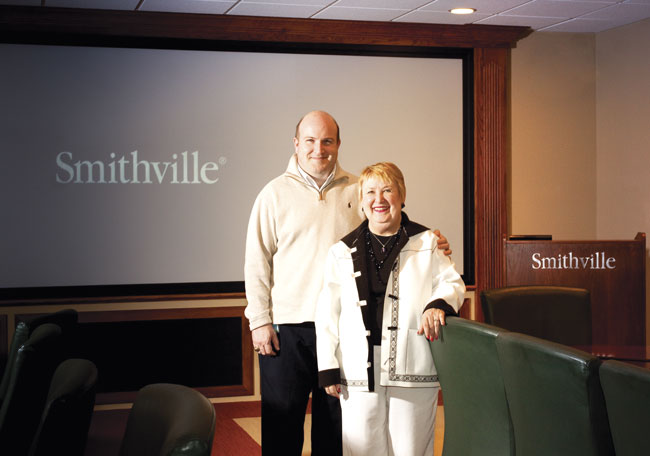 It’s a safe bet that few if any residents of Monroe County have ever met the CEO of Comcast, AT&T, or any other of the telecom behemoths that provide the masses with phone and Internet services. But if you pay your monthly bill to Smithville Communications Inc.—an independent telecommunications company headquartered in Ellettsville—there’s a good chance you’ve come across President and CEO Darby McCarty or her son, Smithville Executive VP Cullen McCarty, or at least know someone who has.

“We’re a family business and very much a part of the community,” says Darby, who grew up in Ellettsville and took charge of the company in 2003. Still, as Cullen is quick to point out, Smithville isn’t exactly a mom-and-pop operation either. “People assume we’re a small company,” he says, “but we’re pretty broad in our reach.”

Founded in 1922 as a telephone service provider, Smithville Communications—the parent company of Smithville Telephone, Smithville Digital, and Smithville Telecom—has grown to become Indiana’s largest independent telecommunications company, with more than 29,000 customers in 17 counties. The company has also taken the lead in bringing cutting-edge communications technology to southern Indiana. Recently, Smithville embarked on an ambitious $90 million project to replace all of the copper wiring in its network with high-speed fiber-optic cables—a first in the region.

“Every one of our customers will have access to the fiber-optic network, which will offer one hundred megs [megabits] of bandwidth for every home and business,” says Cullen, who is also president of Smithville Digital. “That’s enough to be able to download a feature-length movie in less than a minute.”

“Prisoners at the Monroe County Jail [in downtown Bloomington] are taken across the street to be seen by doctors at Centerstone [a mental-illness and addiction treatment center], which is dangerous and takes deputies off the streets to escort and guard the prisoners,” Cullen says. “With the network, doctors can evaluate prisoners remotely.”

Still, for all its growth and cutting-edge technology, Smithville is a community-oriented business at heart. The company supports many local efforts, including the Lotus World Music & Arts Festival and the Monroe County Fall Festival in Ellettsville.

“Supporting those events is important because they create community,” says Darby. “At the end of the day, it’s about connecting with people.”