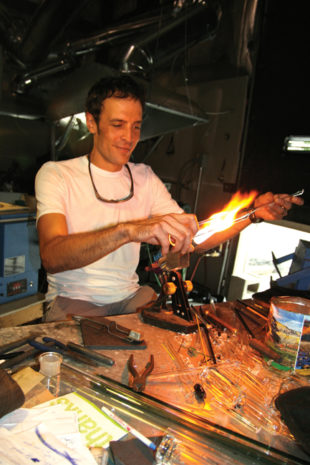 Ryan Hoffman, 33, has the soul of a Renaissance artist—someone who discovers a craft, then learns it through hard work and persistence. The Venetian-inspired glassworks displayed at his Volta Glass Studio on West 6th Street suggest that he is well on his way to becoming a master.

Hoffman was a 20-year-old business major at the University of Southern Indiana in Evansville when he fell in love with glass. “I was going to school full time, working in a factory part time, and then blowing glass as an apprentice from 9 pm until about 2 am every day,” he says. “I did that for about a year. I was immersed in the glass; it just took over everything.”

Hoffman studied with Evansville glass artist Dene Stephens and Italian master Cesare Toffolo. He was influenced by the work of American glass master Sally Prasch and served as her studio assistant at the famous Penland School of Crafts in North Carolina. He hopes to visit Venice, “glass mecca” as he calls it, someday soon.

Volta has two gallieries, plus a workshop that customers can look into through a large window. They can watch as jets of fire jump out of the shadows and glass melts and reforms in the hands of Hoffman and his staff. The studio also has two galleries: one holds Hoffman’s art glass—goblets, etched vases, jewelry—and the other has functional pieces. Everything in the store is made onsite.

Hoffman will introduce a new line of art glass in late October that will incorporate elements of functional glass with classic forms. “The new line will still be inspired by traditional work but will show the direct correlation between the functional side and the art side of things,” he says.

The studio takes commissions for custom work. “If you like an element of one of my pieces, we can sketch up a design,” he says.

Hoffman would like to add lighting fixtures to his repertoire and is looking for a welder to collaborate with him. “I need someone to make chandelier frames. I’ve been trying to find a welder for two years.” Applicants are welcome. For Kitchen and Bath Räke Is a One-Stop Shop