Established over 30 years ago, à propos Gifts and Jewelry is not only a Bloomington institution but emblematic of the town itself. So when owner Anita Rozlapa says the store reflects her taste and personality, she actually describes much of what gives Bloomington its character.

Rozlapa compares her store to “a gallery, but without being intimidating, stiff, or formal. The point is for people to feel comfortable.” As the only employee, she chooses every item in the store herself. From Kenyan fair-trade stuffed animals to Frank Lloyd Wright-design ties, Rozlapa says, “I buy things that strike my fancy, that are beautiful, are well-constructed, and have a good design.”

Her tastes are eclectic—“I love Brahms, but I’m also an Elvis Presley fan,” she says. While à propos is known for its crystal, art glass, Japanese ceramics, silk shawls, scarves, and, increasingly, its jewelry, she is quick to point out that “everything
I choose isn’t totally serious.”

Her whimsical side is seen particularly in the children’s toys. “This is fun,” she says, picking up a small item. “A tape measurer that’s a Pinocchio.” She smiles as she pulls out the tape/nose.

Rozlapa believes her artistic side was inherited. Born in Latvia, her father was the stage designer for the Latvian National Opera in Riga. “And my mother was musical,” she says, “so I grew up with art, music, and literature.” After World War II, “just before the Iron Curtain came down,” her parents immigrated to Chicago “with just two suitcases, a teddy bear, and little ol’ me.”

Rozlapa later earned a B.A., M.A., and Ph.D. in romance languages from the University of Chicago. Like many others, she moved to Bloomington to teach at IU. But when she lost interest in the publishing demands of teaching, she decided to open a shop. Established in 1979 in Fountain Square, à propos moved in 1985 to its current spot on the downtown Square at 113 N. College.

Over the years, she says, her customers have been “very loyal, very supportive,” which was never more evident than in 2007.

“I was hit by a car while crossing the street,” she says. “I broke a leg and both ankles and had to close the store for five months.” Rozlapa says she was “shocked” by the response she got, not only from her local and out-of-town customers
but from many people in the community—some of whom she had never met. “I got innumerable phone calls. Flowers, cards, and even ice cream. … It was so heartwarming.”

Back on her feet, she has resumed her role as storeowner. “You meet a lot of interesting people. You learn about life.” 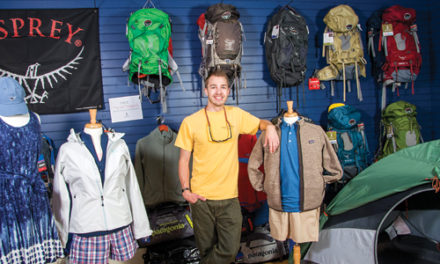