David Weigand and his audience. Photo by Shannon Zahnle

David Weigand would never compare himself to Houdini. In fact, he goes to great lengths to distance himself from well-known magicians, preferring to call himself a “children’s entertainer.”

“People say I’m a magician, but I like to think I use magic to entertain children,” he says.

Weigand, a Bloomington native and IU graduate, began his children’s entertainment business, Octopus, Ink, in 2004 after working for the City of Bloomington Parks and Recreation Department. There he coordinated youth programs, including hosting birthday parties. He needed to entertain the kids, so he taught himself table magic tricks and how to twist balloons into fun shapes. Those skills became the basis for Octopus, Ink, though Weigand had no plans to become an entrepreneur.

“I knew I enjoyed making the kids laugh, but I didn’t really know what was getting started,” he says.

The ability to launch a part-time business with flexible hours proved opportune when Weigand and his wife, Anna, decided to become parents. Now his day job is caring for daughter Grace, and son Elliott, while Anna works full time and studies nursing at Ivy Tech Community College.

Weigand says up to now business has been “just about as big” as he has wanted it to be. He has entertained children at private parties and school carnivals and worked larger events such as Taste of Bloomington. Now that his kids are getting older, he feels Octopus, Ink is ready to grow.

“I see myself becoming a children’s event consultant and expanding what I do so that I can set up entire events,” he says.

For now, Weigand continues to focus on the small things—small magic for small children.

“When I’m at a party, sometimes the adults can outnumber the children, but I have to make the parents disappear and focus on my audience,” he says. “What I do is age-appropriate—for young children. I can amaze them. I would like to think I might be able to amaze some adults, too, but I focus on amazing the kids.” 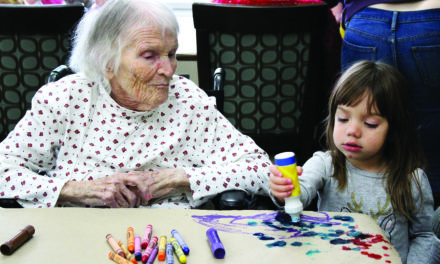