There are few among us who, at some point in childhood, didn’t proclaim a desire to be firefighters when we grew up. And, as Mom and Dad would tell us, we had to eat our vegetables if this were to become a reality.

Parents wishing to employ this same bit of hyperbole can point to the organic vegetable garden planted behind the Bloomington Fire Department station on East 4th Street downtown, and to the firefighters who enjoy its bounty.

“Urban gardens are a great way to raise awareness of organic gardening in general, and they benefit the location and give people a tangible way to relate to our product,” says Johnson. In this case, the product is organic plant and garden food, which, as he notes, “isn’t like wine—you can’t taste it. So we have to demonstrate that it works.”

The concept of urban gardens is nothing new—during World War II, for instance, nearly 40 percent of America’s produce was grown in “victory gardens,” which were planted just about everywhere possible. “Now, it’s like one or two percent,” says Johnson, “but it’s growing. This project will be a triple win—it helps us, it helps the fire station, and it helps the public get enthusiastic about urban gardening.”

Why the fire station? “It was a perfect fit. Those guys cook on site, and they could use a small garden,” says Johnson. Abundant Harvest Farms set up the raised beds and handles the planting and composting. As for the firefighters, “Their only requirement is that they water it,” says Johnson—which is what they do best anyway.

“We’re excited to be able to partner with them to help promote sustainability in Bloomington,” says Fire Chief Roger Kerr. “It’ll be really neat to watch the garden grow. And we’ve got some self-proclaimed chefs here who will be able to make some good food with the fresh vegetables.” 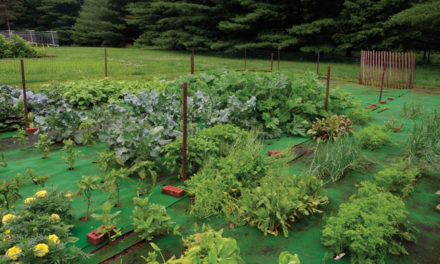