At the after-party for the 2013 PRIDE Film Festival at the Buskirk-Chumley Theater, chocolatier David Fletcher of BLU Boy Chocolate Café and Cakery served up an unorthodox dish: three strapping young men, painted in stripes of chocolate from head to toe.

“I think there’s a need to have a contrast between the chocolate that everybody’s familiar with and chocolate as an art medium,” says Fletcher. But those seeking to ascribe a greater meaning to the work might heed his shorter explanation: “Why not?”

“For me, this is a really great opportunity for a creative outlet,” says Dennis, one of the chocolate-covered men. The connection with the PRIDE Film Festival has a personal meaning for him as well: his uncle recently married his male partner. “It’s cool to be able to support that community as it’s really coming into this critical time,” he says.

Dennis works at BLU Boy as a barista and when he heard Fletcher was seeking volunteer models, he recruited two buddies, Peter and Hank, whom he knew from his Ultimate Frisbee club. The three are IU students, not professional models, a distinction entirely irrelevant to their wide-eyed audience.

The crowd of partygoers, already energized by the thumping dance music and the colorful lightshow, responded enthusiastically when the men took the stage. Hooting and cheering, dancers flocked to the pedestals to catch a closer look; many pulled out their phones and cameras to capture the moment.

Unfazed by, or perhaps appreciative of, the attention focused on them, the three struck dramatic poses, their chocolate-striped bodies lit up by the colored spotlights.

The PRIDE Film Festival offers a variety of LGBT-themed films from around the world. This year’s festival, the tenth annual, also featured a flashmob (unofficial) wedding, officiated by Mayor Mark Kruzan and attended by a number of city and county council members. 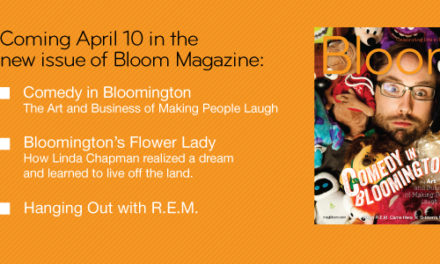