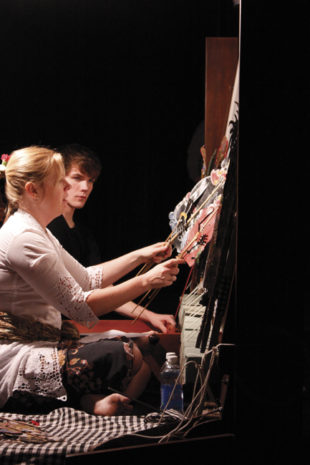 Jennifer Goodlander performs with a student assistant. The puppeteer, or dalang, usually has an assistant or two to help keep the puppets organized, as one performance could have as many as 100 puppets. Photo by H. K. Han

As a Balinese puppet master, Jennifer Goodlander improvises stories, provides the voices, and carefully manipulates the figures, but you never actually see the puppets or her. She performs while hidden behind a screen, casting shadows of the colorful leather puppets for the audience. Soon, Bloomingtonians will get a chance to witness an authentic Balinese puppet show.

In 2008, while earning her Ph.D. in interdisciplinary arts at Ohio University, Goodlander, a native of Grand Rapids, Michigan, received a Fulbright Fellowship to study in Bali, Indonesia. Once there she became fascinated with shadow puppetry, called wayang kulit, an integral part of Balinese culture since the first century. So taken was Goodlander, that she was offered the rare opportunity of becoming a puppet master, or dalang. According to Goodlander, the initiation ritual required visiting nine holy springs, giving offerings, and being blessed by priests. “There’s also a ritual where you become married to the puppets,” she says.

In August, Goodlander accepted an assistant professorship at the IU Department of Theatre & Drama, and on March 3 at 1:30 pm she will perform a traditional Balinese shadow-puppet show at the Mathers Museum of World Cultures. It is a “rare and special opportunity to see wayang kulit” in America, she says, especially outside of a big city.

Goodlander, 38, explains that the most important aspect of wayang kulit is the relationship between the performance and Bali’s religious culture. Performances held during the day “are just for the gods,” she says. Night performances are a part of special public ceremonies, like a temple anniversary or a tooth-filing ceremony that signifies a teenager’s coming of age.

During public performances, the stage is concealed behind a screen. Only the gods are permitted to see the colorful, intricately carved leather puppets, while the audience may see only their shadows. As a dalang, Goodlander manipulates the puppets and gives them voices in an ancient Indonesian court language. Typical presentations include jokes, commentary on social issues, and lessons, with translations provided by a special clown character who speaks the local language.

Goodlander’s performance at the Mathers Museum will be followed by a children’s puppet-making workshop. While the show won’t be a traditional late-night performance, Goodlander promises an authentic experience. “It will be inside. We can turn off the lights and make shadows.” 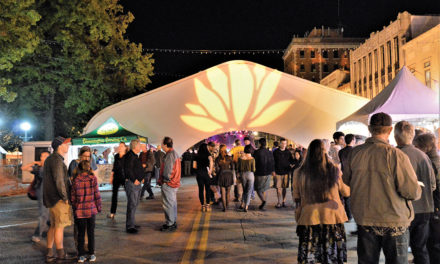