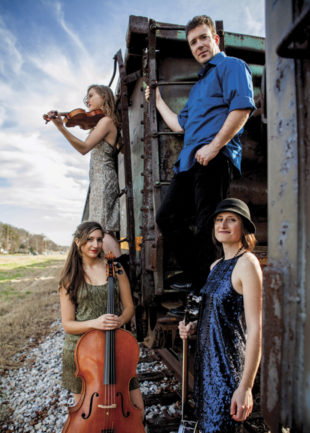 The Nashville, Tennessee-based band Harpeth Rising, a quartet made up of IU Jacobs School of Music alumni, has been on one long road trip, from Bloomington to Hawaii to the United Kingdom. The quartet’s achievements are wide-ranging, too, from being named Nashville’s top local band in 2010 to having their third and latest CD, The End of the World, at the top of an international folk chart.

Harpeth Rising’s genesis was a trip from Bloomington to California made in 2007 by co-founders Jordana Greenberg and Rebecca Reed-Lunn, with a stop in Colorado to attend the Telluride Bluegrass festival. The pair busked across the country and then shipped Greenberg’s car to Hawaii for a year-long stint playing gigs there.

While violinist Greenberg was adept at crossing between the classical and old-time music worlds, Reed-Lunn had made few forays beyond the classical canon before befriending Greenberg at IU; she trained on viola but picked up the banjo from watching Pete Seeger videos on YouTube and from other musicians.

The pair traveled to Nashville in 2009, “because that’s a wonderful place to be when you’re trying to play acoustic music,” says Greenberg. They added fellow Jacobs alumni Chris Burgess (percussion) and Maria Di Meglio (cello) and named the band after a river that runs through Nashville. The musicians, all in their 20s, now play mostly original songs shaped by bluegrass, Celtic, and folk and steeped in classical technique.

“We just started writing originals and then went with what sounded most natural,” says Greenberg. “Whenever you’re writing original music, it’s probably going to be a blend of things rather than one specific genre. We write in a very free-form style, so anything that’s influencing our lives at that time ends up coming out in the music.”

Harpeth Rising makes frequent tours of the Midwest, South, and Northeast and has toured the U.K. three times, including an appearance at the Cambridge Folk Festival. They play Bloomington once or twice a year but visit Indianapolis and Louisville more often.

Reed-Lunn describes her goal as “to always keep developing. I’ve never felt static with this group, and as long as we stay that way I think we’ll all be happy.”