The sound of the engines, the smell of dust and fuel, the heart-stopping competition as racecars roar bumper-to-bumper and side-by-side through the semi-high-banked oval on the dirt track at Bloomington Speedway. Luke Bland loved every minute of it as a boy.

But the Bloomington native never got the opportunity to race until a friend asked last year if he’d like to strap-in and give it a go. “The first night out ended in a flat tire and broken front-end parts because I’d run into so many other cars,” says Bland, 37, ancient for a rookie driver. “My four-year-old son asked me why I kept pushing cars off the track.”

Just a few weeks later, Bland, a project manager at Poynter Sheet Metal, was perched behind the wheel of his own car and winning his first race.

A year later, Bland, in his eye-catching, red-white-and-blue Captain America car, can call himself a champion. In early September, he wrapped up the series title and Rookie of the Year honors in Bloomington Speedway’s Hornets division and ranks in the top five in national competition.

“I’m very blessed and fortunate that things have gone my way so far,” he says.

An animal lover, Bland has put his newfound fame to good use by establishing a charity, Racing for Paws. He, his wife, Jennifer, and a friend, Jamie Crafton, work with local businesses and individuals who pledge to make donations to the Bloomington Animal Shelter every time Bland wins a race.

“This whole racing thing and doing well at it, the charity is part of the reason behind it,” says Bland. “It’s a great way to promote a good cause.”

Bland is already gearing up for another successful summer of Friday nights at Bloomington Speedway in 2014. He’s encouraging people to attend, to donate to Racing for Paws, and to buy one of his T-shirts—100 percent of the proceeds from those sales are donated to WildCare Inc., a local animal rescue organization. 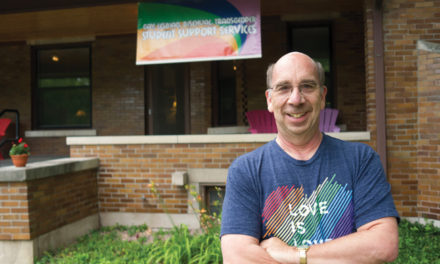