“What becomes a legend most?” asked a long-running series of ads for a luxury fur company. Bloomington artist Dale Enochs asked himself that daunting question when he was commissioned to create an original work of art for legendary musician Paul McCartney.

For Enochs, 61, creator of the Bloomington Banquet sculpture located near Showers Plaza on the B-Line Trail, it was the chance of a lifetime. The music of The Beatles was the soundtrack of his youth.

“It was a phenomenal opportunity that came to me through a network of Bloomington friends,” Enochs says. “Robert Meitus, who is an Indianapolis attorney and married to musician Carrie Newcomer, was asked by Marty Bechtold, director of booking at Bankers Life Fieldhouse, for a name of an artist who might be considered to create a work for Paul McCartney when he performed there in July. Carrie contacted Suzanne Halvorson, who’s a fiber artist and good friend, and she told me about it.”

“The sculpture is in the form of an Egyptian cartouche—an oval with a horizontal shape at one end that indicates the hieroglyphic inside is a royal name, as in Sir Paul,” explains Enochs. “The imagery within begins at the base with a depiction of a four-sectioned beetle with a heart at the center. The beetle is partaking of a golden lotus, referencing The Beatles’ spiritual pursuits. The lotus gives bloom to a heart within a heart. The inner heart in this imagery transforms into a stylized image of Mr. McCartney’s Höfner bass guitar, which in turn bursts out of the confines of the cartouche. The upper portion of the bursting guitar contains yet another heart image.”

The hand-carved base of Indiana limestone has the words “Ecce Cor Meum” which is Latin for “Behold My Heart,” the motto on McCartney’s coat of arms. The work was presented to McCartney prior to his performance on July 14, 2013.

Enochs, who did not meet McCartney, hopes his work is meaningful to his idol. At just eight pounds, it is lightweight enough to be transported to one of his homes.

“I couldn’t create something that had to be delivered with a forklift,” Enochs says. 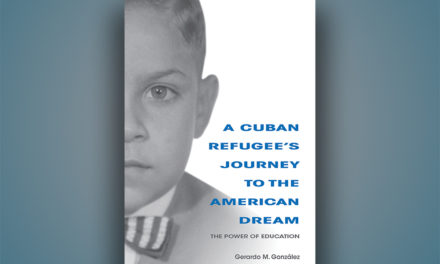