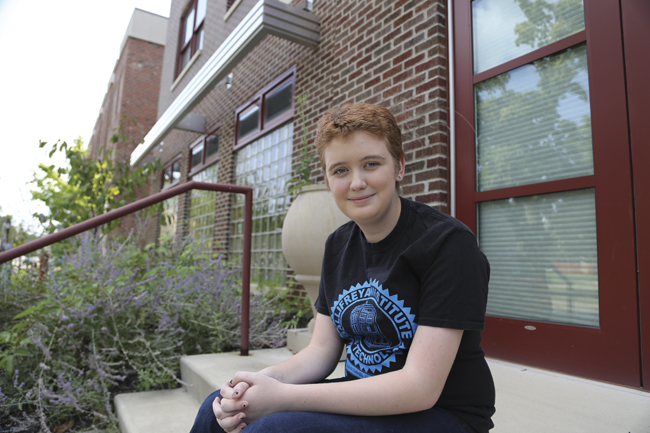 According to the Centers for Disease Control and Prevention, one in three teens will be involved in an abusive relationship, and most won’t tell anyone. If they do talk about it, they’re more likely to turn to a peer rather than an adult.

At Bloomington High School North, that peer who is trained to listen and be their advocate is Makayla Thomas.

The 16-year-old junior received 30 hours of training at Middle Way House in how to help people in unhealthy relationships. The training from the Bloomington shelter and violence prevention agency included active listening, understanding school policy on reporting harassment and abuse, how to answer questions about domestic and sexual violence, and what support services are available for survivors of abuse.

In the two years she has been a volunteer advocate, Thomas says a few students have sought her out to talk about their experiences. “Because teens are more likely to talk to other teens, it’s important to have peers trained,” she says. “But we never make decisions for them. We present options: You could take path A or path B.”

In exploring school policy, Thomas learned that the school did indeed have a sexual harassment/assault policy, but it was kept out of view in the school office. “You had to ask for it,” she recalls, “and there’s only one reason someone would ask.” Thomas met with the principal to press for a more public display of the policy, which is now posted in the office and in the library.

The teen advocate program, including two advocates at Bloomington High School South, was the brainchild of Cierra Thomas-Williams, prevention programs coordinator of Middle Way House, who regularly visits all Monroe County junior and senior high schools to talk about violence prevention. But it takes more than a program to be effective, it takes people with the right personality, says Thomas-Williams. “Makayla came off as a leader, and I pulled her in right away.”

Thomas was happy to sign on because, she says, “I had friends who were in unhealthy relationships.” In addition to being available at any time to fellow students, she tries to promote healthy relationships by “being a good friend to other people and not tolerating harassment or bullying.” New Hope Shelter: A Refuge for Families in Need