Colorizing old photographs is detective work says illustrator Avi A. Katz. Last December, Katz embarked on a project to render 15 black-and-white images of downtown Bloomington as they would have appeared in reality. Now completed, they form an exhibit, “Living in Color,” on display at the Monroe County History Center through September 27.

Dating from the 1910s to the 1940s, the images, drawn from the History Center’s archives, depict scenes such as a back-to-school sale at JCPenney, a mock-commencement ceremony at the Book Nook on South Indiana Avenue, and firemen battling a blaze at a burning theater on North Walnut. Some contain historic personages including Hoagy Carmichael and Herman B Wells.

In his quest for realism, Katz strove to replicate the colors of minutiae such as the lettering on movie posters or the designs on product logos. He painstakingly used the Internet to search out examples when he was uncertain.

Katz appreciates black-and-white photos, but says they can lead people to picture the past as if it was colorless. His goal is to make viewers feel connected to history. “For people who lived then, the present was in color. So let’s enjoy what they had,” he says. “That’s the whole point of this exhibit.” 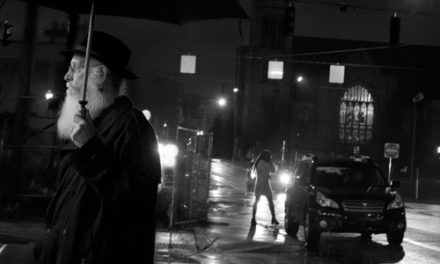