June 8, 2013. The Buskirk-Chumley Theater is packed. It’s the closing night of Bloomington’s inaugural Limestone Comedy Festival. The sold-out crowd, buoyed by the festival’s success thus far, buzzes with anticipation. As the house lights dim, the buzz grows louder until, with the announcement, “Ladies and gentlemen, Pete Holmes!” it bursts into an avalanche of applause. The gangly 6-foot-6-inch comedian bounds onto the stage, the crowd settles in, and the laughter begins.

Holmes, like fellow festival headliners Maria Bamford, Tig Notaro, and Doug Benson, is a topflight, cutting-edge comedian who frequently appears on TV comedy specials, late-night talk shows (Holmes now has his own), and at top venues around the country. So what the heck are they doing at the Buskirk-Chumley Theater?

Actually, Bloomington has a surprisingly long and storied history as a comedy hotspot. But this past summer’s festival, produced by the owner of The Comedy Attic, Jared Thompson, and locally based comic Mat Alano-Martin, has taken the town to another level.

“Through the Attic, and now the festival, we’ve built up a very sophisticated audience that the smartest comedians really appreciate,” says Thompson. “Bloomington has become a place where you can see comics you otherwise wouldn’t be able to see outside of New York, Chicago, and Los Angeles.”

For Brad Wilhelm, a longtime master of ceremonies on the local comedy scene and director of Rhino’s Youth Center, stand-up comedy deserves to be recognized as an art form alongside music, dance, and theater. “Stand-up is as disciplined as ballet, as creative as jazz, as difficult as opera, and all things in between,” he says. “To be a good stand-up comic you need a fully articulated set of skills that take years to develop and a sharp, creative mind.” 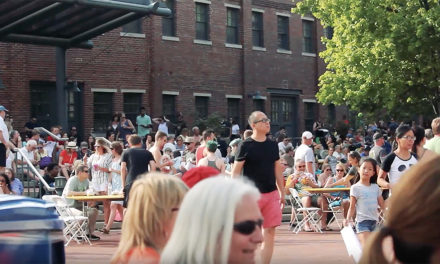 Recipe of the Week: Blueberry Soup