Slow down as you pass the window at Andrew Davis Clothiers at 101 W. Kirkwood, and a display of funky, distinctively American-looking watches is liable to catch your eye. Look closer at the brand name, Shinola, and it might ring a bell somewhere in the distant recesses of your mind.

Ever hear the phrase, “You don’t know shit from Shinola”?

Shinola was a popular shoe polish brand back in the 1940s — hence the phrase. Fast forward to 2011 and marketing genius Tom Kartsotis, founder of Fossil, bought the rights to the name and created a line of retro-looking watches, bicycles, and leather goods.

Since its launch, Shinola has garnered considerable media attention, in no small part because the company chose Detroit, Michigan, for its headquarters. Once one of the world’s largest manufacturing centers, Detroit is now synonymous with urban blight, skyrocketing unemployment, and bankruptcy.

However, Kartsotis’ research revealed that Detroit still has cachet with consumers who associate the city with reliability and solid Midwestern values. As a result, Shinola’s marketing stresses American workmanship, and company advertisements feature actual workers. Shinola has partnered with Ronda AG, a Swiss maker of watch movements, as well as several storied American manufacturers.

Shinola watches are hand-assembled from Swiss-made parts in an Art Deco building that once housed the General Motors Research Laboratory. The watches are then distributed to large luxury department stores such as Bloomingdale’s and Neiman Marcus, upscale jewelry stores, and independent fashion retailers including Andrew Davis Clothiers.

Andrew Davis started selling Shinola watches about six months ago. Store manager Macey Dale says the brand was a “perfect fit” with the store’s philosophy. “We’ve always supported USA-made products. It’s exciting to see manufacturing coming back to the states. All of our store labels are American made,” he explains.

Andrew Davis carries 10 different styles of Shinola watches, ranging in price from $550 to $900, which is significantly less than most comparable Swiss-made watches. Dale points out that Shinola watches have handcrafted Horween leather bands. Chicago-based Horween Leather Company is one of the oldest continuously operated tanneries in the country and one of Shinola’s partners. Andrew Davis also carries a selection of Shinola-Horween leather goods.

“Customer response has been strong. There is definitely a buzz on the street about Shinola watches,” says Dale, noting that only Andrew Davis carries the brand in Bloomington. “People have come in the store who never had before when they find out we carry them.” 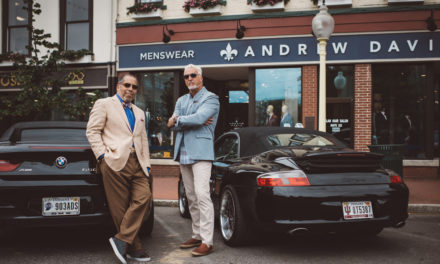 Gather Moves to New Space in Storefront on the Square