If it’s not the rotating gyros meat in the front window at the corner of East Kirkwood and South Walnut, perhaps it’s the nautical chain on the heavy wooden door that’s most noticeable at the entrance to The Trojan Horse, a Bloomington icon for 36 years.

One funny dish on The Trojan Horse menu is the Chicken Giannoulas, a boneless breast, marinated, grilled, and served on sautéed rice with vegetables. The name comes not from any Greek tradition but from Ted Giannoulas, the man inside, arguably, the most beloved sports mascot of all time, the San Diego Chicken.

In recent years, the restaurant has increased its vegetarian offerings, adding a falafel taco, for example, and the Popeye & Olive Oil sandwich — “basically an adult grilled cheese with sautéed spinach and garlic and brie with peach preserves on Bakehouse bread,” Stalter says.

The Trojan Horse also offers American fare such as fresh-ground hamburgers and grilled pork tenderloin sandwiches. But the foundation of the menu remains Greek, with favorites such as the gyros sandwich, souvlaki skewer, and the always entertaining flaming cheese dish, saganaki.

But there’s an additional incentive to keep customers coming back: the rewards program, which has now gone high-tech.

For the past seven years, the restaurant had a “Hero’s Club” (gyros=heros) which frequent diners could join for discounts on meals. “It was all pretty much done on paper, and manually entered into the database,” explains Stalter, “but with people moving, changing emails, et cetera, it became outdated.” Now it’s been replaced with a new smartphone app called LoyalBlocks.

“It’s easy to sign up and start reaping the benefits right away,” says Stalter. “The first time you come in after signing up, you get $5 off your purchase, and for your first 10 visits, you get 10 percent off, every time.” That rises to 15 percent after further visits — and it applies to the customer indefinitely.

“With our old program, you didn’t start getting anything until you’d eaten here 10 out of 12 months,” says Stalter. “So this is a more immediate benefit for our loyal customers.” Discounts for diners on the old system will still be honored through the end of the year. 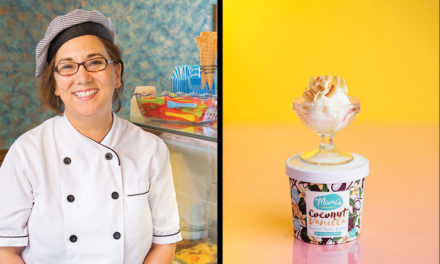