There is plenty to love about living in a college town. Full of verve and attitude, Bloomington’s student population keeps our city thriving and young at heart.

But sometimes, just sometimes, you want your drinking establishment like your wine, with a little age on it. And for that, there is now C3.

Located on the southeast end of town, far from the madding crowds hanging out in Bloomington’s myriad downtown eating and drinking venues, C3 is named for its building plot in the Village Center in Renwick, as well as for the crafted cocktails and cuisine you will find there. Its owner, Bloomington developer Eric Stolberg, and his longtime property manager, Debi Otteran, wanted to create a neighborhood bar, and that they did, if the neighborhood in question is the very chic and well-designed Renwick, developed by WS Property Group.

Within strolling distance of the homes in Renwick, C3 is an elegant and sophisticated space created by Bloomington designer Tom Coombes — all teal greens and browns and funky animal print chairs. There is a long bar, a plush lounge, and lots of patio seating for warm evenings.

And, of course, there is food and drink. Stolberg put management of the place in the hands of A Pots and Pans Production, run by Scott Wise of Scotty’s Brewhouse, who in turn hired Allison Smith as general manager and Ken Stiles to run the kitchen. The result is polished, professional, and delicious.

The food at C3 is “small plate” fare — except that the plates aren’t small at all. Order the sweet potato skins, and you get four full halves stuffed with succulent chicken in a tangy cilantro-lime cream sauce. The grilled cheese and soup is presented with wedges of sandwich — sharp, aged cheddar in buttery sourdough — nestled in cups of stomach-warming tomato soup. You not only can dunk, but they have started the dunking for you. The fillet sliders are medallions of beef tenderloin, grilled medium rare, on tiny buns custom-baked at the next-door bakery, Crumble. They are slathered with creamy horseradish sauce topped with fried onion rings — and you get three of them. Though you may not be able to eat anything else, get the fries anyway. Thick, cut in-house, and served with three tasty dips, they are hard to resist — as are the crunchy, addictive crab-and-corn hush puppies. And the luscious crab mac ’n’ cheese is rich and satisfying.

Not all of the menu is comfort food. There are some lighter items, too, like the  spicy tuna wraps — packets of lettuce with rare, seared tuna and crunchy vegetables — which are wonderful, and the seasonal vegetable varies with the available produce. There are a couple of salads and a charcuterie plate as well that raise the offerings beyond the usual Bloomington bar fare.

But the point of a neighborhood bar is, of course, the bar. Smith has created a list of fascinating cocktails around small batch craft spirits, including the intriguingly named Breaking Bad — a concoction of bourbon, Cointreau, raspberry jam, grapefruit juice, and habañero bitters. With Bloomington’s first wine kegs, C3 offers wines by the glass that are always fresh, as well as a small and carefully chosen list of bottles.

And there is a good chance that the place will stay student-free. In these days of grade inflation, students won’t tolerate one C, let alone 3. 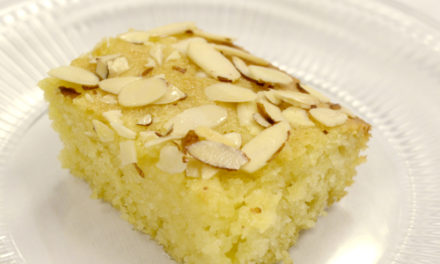 Recipe of the Month: Semolina Cake