Bloomington’s built environment says a lot about the history of this place and the people who have made their lives here.

When you look around our town and the surrounding rural areas, two things become clear. First, although this city is nearly two centuries old, the majority of buildings date from the most recent hundred years. Second, the buildings that have survived are those that have adapted to changing patterns of use.

Each of the homes featured here was built in the 20th century. Together they create a portrait of Bloomington’s changing social and economic makeup during those years. While families have become smaller, individual family members have become used to more personal space. As global travel has become vastly more common than it was even in the middle of the last century, aesthetic sensibilities have become more cosmopolitan. And most residents of Bloomington and Monroe County now work in professional or service-oriented businesses, rather than in agriculture or manufacturing.

The oldest of our featured homes is located in Prospect Hill, one of Bloomington’s earliest neighborhoods, just west of downtown. Originally built some time between 1900 and 1920, the house was rebuilt in 1936 after a devastating fire. This storybook-worthy cottage was briefly home to carpenter Ben Sturbaum, who lived there in the 1980s as part of his family’s project of restoring Prospect Hill to a thriving neighborhood following a period of decline. Patricia Glushko and John McDowell, who have owned the house since 1989, have made the house thoroughly their own, putting together a comfortable, eclectic interior.

The home of Gary and Linda Anderson was built in a semi-rural area just east of Bloomington developed for residential use beginning in the 1940s, when the increasing availability of cars allowed people to commute to jobs in town. Formerly a dilapidated one-story bungalow on a large, long-neglected lot, the house today is notable for its glamorous 1940s interior; distinctive, artful exterior; and parklike setting.

Karen Pitkin and Kurt Larsen live in a house that reflects the trend toward subdividing large suburban tracts of land for residential development. The Heritage Woods subdivision on Bloomington’s east side was developed beginning in the early 1960s, so many of its homes are examples of the ranch-style architecture popular at the time. Pitkin and Larsen have reworked their home for contemporary living, drawing on its subtle Asian aesthetic.

Although the newest of these homes was built in 1978, it intentionally reflects the International Style that was avant-garde during the 1920s and ’30s. Architect Larry Phelps designed the home for his family in rural northwestern Monroe County — one of the earliest parts of the county to be settled, but one that has remained largely rural in character despite its location within commuting distance of Indianapolis.

That the rustic hills east of Ellettsville, Indiana, should conceal a gem of modernist architecture isn’t really surprising. The blend of apparent opposites is part of what defines our town in so many ways. 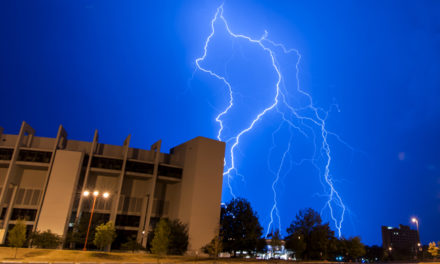