The Emerald Pencil is both a gallery and a curiosity shop, says its owner Pamela Keech.

“In the 19th century, people loved to bring home souvenirs, but they brought home things they found rather than bought, like flowers or shells,” Keech says. “They kept the items in a piece of furniture that they would refer to as a ‘curiosity cabinet.’ I do the same thing. I collect curiosities.”

The Emerald Pencil, which opened in Nashville, Indiana, last September, is filled with collages, assemblages, photographs, jewelry, and antiques. The Victorian Gothic house is also the home and art studio of its proprietor.

Keech received her M.F.A. from The Ohio State University. Her postgraduate work focused on expanded arts, a category that described everything outside traditional arts, such as painting and sculpture, to include animation, performance, video, and conceptual arts.

“We didn’t know what we were doing,” Keech recalls of her class. “We just sort of jumped in. It was the times. My thesis was a fictional Victorian-period murder mystery, and I built the scene.”

Her thesis set the stage for a future career. Years later, Keech became a curator at the Tenement Museum in New York City. The museum occupies an 1863 apartment building on the Lower East Side of Manhattan. Keech’s work as curator was to create exhibits that reflected how the apartments looked in different eras.

Keech’s primary focus now is The Emerald Pencil and her own artwork. She describes her art as narrative installations, found-object assemblage, digital photography, and cut-paper collage.

At The Emerald Pencil, each object has a story to tell, and Keech shares the stories with her customers. Even the store’s name has a story.

“I made up the name, The Emerald Pencil,” she explains. “ I have an emerald ring that was given to me by the person I loved the most in the whole wide world. And I have always liked green. I draw all the time. Pencils are a big part of my life, and I’m very taken by them. I like to take a pencil and start on a page and just let it go and go.”

The Emerald Pencil is located at 23 N. Jefferson St. in Nashville. For more information, visit emeraldpencil.com or call 917-304-5285. 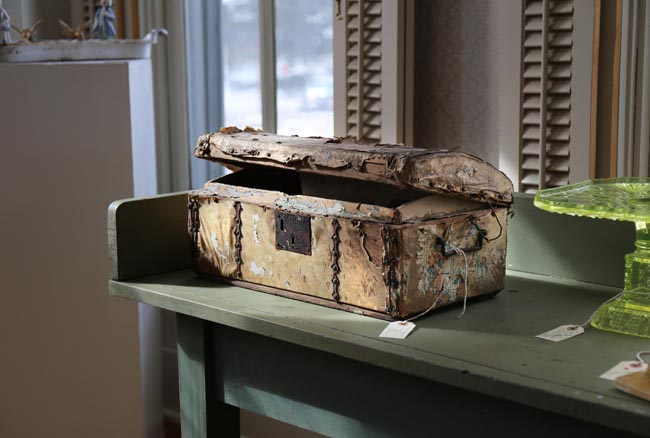