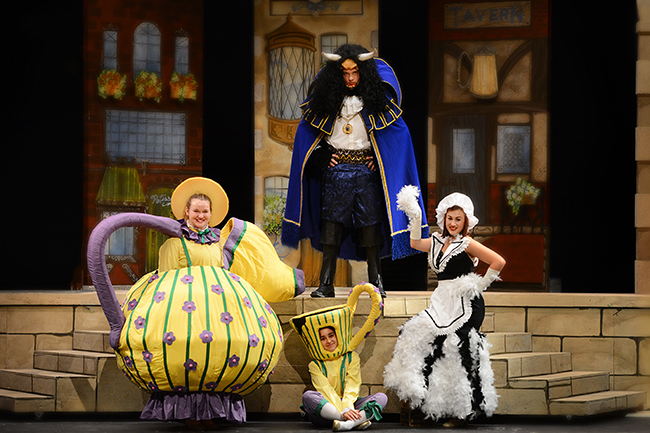 When Sounds of South, the advanced choir group at Bloomington High School South, decided to stage a production of Beauty and the Beast in 2015, Director Gwen Witten Upchurch knew they would need to create more than 100 costumes. For help, she turned to local fiber artist Martina Celerin, who had designed some of the costumes and props for South’s production of Phantom of the Opera last year.

“Because my art experiences have been on a much smaller scale, I thought it would be both a lot of fun and a chance to expand my art horizons,” says Celerin, a former plant biologist-turned-weaver who exhibits her work — wall hangings featuring three-dimensional weavings of plants, vegetables, and other nature scenes — in galleries and art shows in Bloomington and around the Midwest. “Those experiences always return something unexpected that enhances my own art.”

To prepare for the daunting task of designing so many intricate costumes, Celerin studied pictures of costumes from other productions of the show, watched videos of several high school performances, and looked at some of the original Disney sketches. As a passenger during drives to and from Michigan for Thanksgiving last year, Celerin sketched nonstop. By the time she got back to Bloomington, she had most of her ideas on paper. And she had decided to use only reclaimed and recycled materials.

Some of the most challenging costumes, she says, were those in the shape of household objects. For example, to create the costume for Mrs. Potts — a character in the shape of a teapot — Celerin combined hula hoops with cooling tubing and covered the contraption with a bedsheet.

Celerin was not alone in her labors. She relied on a three-pronged approach that involved her “sewing faeries” — a group of sewing volunteers — plus the participation of Sounds of South students and, on craft nights, their families as well.