When Bloom first wrote about country singer-songwriter Clayton Anderson in 2010, the Bedford, Indiana, native was taking his first steps toward stardom. The Clayton Anderson Band had opened for country superstar Kenny Chesney, toured throughout the Midwest, and was recording Anderson’s first album with producers and writers in Nashville, Tennessee.

Since then, Anderson has become an established name on the country circuit. His inaugural album, Torn Jeans & Tailgates, reached number 12 on the iTunes country music chart, and his latest release, “Right Where I Belong,” made it to number two. He’s opened for some of the biggest names in country, including Blake Shelton, Jason Aldean, Eric Church, and Darius Rucker, and was featured on the ABC television special The Road to the CMA Awards (Country Music Association). He’s played some of the largest country music festivals and sang the national anthem at an Indianapolis Colts game in 2013. Anderson’s song “Right Where I Belong” was the basis for a Curry Auto Center ad featuring the singer.

“Never in a million years would I have thought that music would lead me to driving a brand new Chevy Silverado and representing such a great local family-owned business,” Anderson says.

Over the past few years, Anderson has become more true to himself as an artist, he says. “‘Right Where I Belong’ was very true to how I was feeling at the time. With the new music I’ve been writing lately, I’m honing in even more on the stories and feelings I want to sing about and express.”

Although Anderson has not signed with a major label, he credits social media with helping him build his core audience and attract new fans. “I love getting tweets or seeing people post on my Facebook and Instagram telling me they just discovered my music on Spotify or iTunes or Pandora and love it.”

When he’s not touring throughout the South and Midwest, Anderson is in the studio recording songs for his next album. “I’ve been keeping very busy on the road; I get real antsy sitting around home in Nashville [Tennessee],” he says. “The only bad thing about being on the road so much is that it limits my trips back home to Indiana for some great Lake Monroe lounging days.” 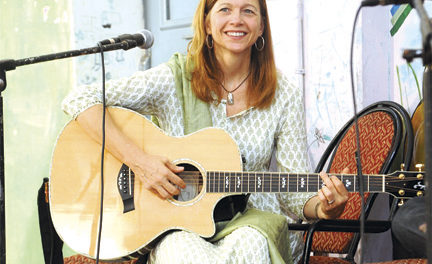 It Takes Math, Physics, & Voodoo to Learn to Make a Violin at IU (Photo Gallery)