W. Kamau Bell is hard to miss. Not only is he 6 feet 4 inches tall, but he’s a flourishing African American sociopolitical comedian with an Emmy-nominated CNN television series, United Shades of America, now in its second season.

But even if you’re a fan you might not have witnessed his nightclub routine (which he somehow continues alongside his CNN series, public radio show, and two popular podcasts). It includes a sendup about Bloomington and its self-image as a bastion of progressive thinking and cultural sophistication in deep-red Indiana.

“I’ve been doing this bit about a woman picking my family up at the airport and telling us about the ‘ethnic restaurant’ in Bloomington,” Kamau says. “And then I read a review that talks about how bad tamales are — not this restaurant’s tamales but tamales, period. Meanwhile, home in San Francisco, we think of tamales as proof there’s a God.”

Kamau, 43, is all about challenging truisms. “Bloomington is definitely a liberal place,” he says. “But that’s compared to the rest of Indiana. It’s not like the People’s Republic of Berkeley, where I live.”

He wrote his Bloomington material for a gig at Indiana University in 2013, and used it a year later at the Comedy Attic. But his real connection to Bloomington is his mother, Janet Cheatham Bell, 79, an outspoken scholar, essayist, and book publisher. Janet, the former ethnic studies consultant for the Indiana Department of Education, has written five books, including a memoir, The Time and Place that Gave Me Life, published in 2007 by IU Press.

She didn’t raise Kamau here; she only moved to Bloomington in 2002. But Janet clearly has been a formative influence on her son. “The way I work is very much a reflection of my mom,” he says. “Challenging assumptions about race, operating outside the system, and not feeling the need to do things the way everybody else does them.”

In his CNN series, Kamau creates humor and insight by placing himself in uncomfortable positions for a black man. For example, in one episode he interviews hooded Ku Klux Klansmen. “Putting himself in confrontational situations is probably something he got from me,” Janet says. “I’ve always been confrontational.”

He often credits his mother publicly for his approach to his craft.  “This is what I learned from my mom,” Kamau told PBS’ Tavis Smiley in a recent interview. “If you’re going to do something your own way, don’t be surprised if it’s hard.” 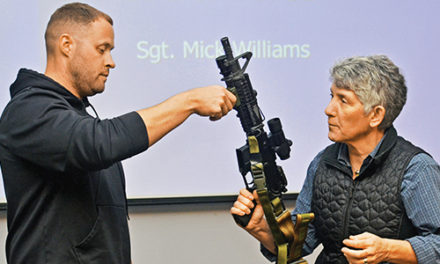