Organized by season, Earth Eats (IU Press) presents recipes alongside tips and stories about food and gardening. The recipes are not only from Chef Orr, but also from a dozen bloggers who contribute to the Earth Eats website. Earth Eats is more than just a cookbook, Corrigan says, “because the show’s not just a cookbook. It’s gardening advice; it’s advice on raising chickens; it’s interviews with local people, interviews with national people who have written books. So, it’s a cookbook, but it’s also a coffee table book.” 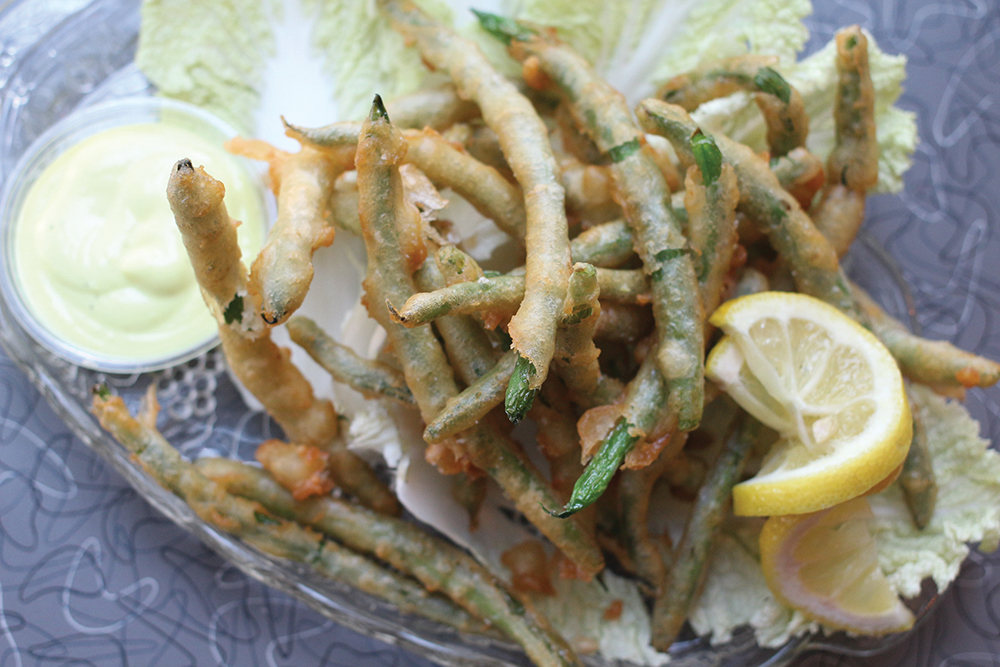 Think about it like this. You’re immersing your food in a really hot environment and steaming it from the inside out. This recipe will help you do it right, so your fries won’t hold on to too much excess oil.

Green beans are getting the deep-fried treatment today. This tempura batter is so light that you’ll be able to see an outline of green in the finished fries.

Snap the stem ends off the beans.

Combine salt, flour, cornstarch, sugar, and beer for batter. Mix with your hands just to combine. The batter should be thinner than pancake batter but thicker than crepe batter. If it’s too thin, add more flour little by little. If it’s too thick, add a touch more beer or water.

Drop the beans into some flour. Then submerge them in the beaten egg, and then into the batter.

Drop the battered green beans into the oil one at a time to prevent them from clumping together. Fry until crispy, 2–3 minutes.

Drain on paper towels and season with salt while the beans are still hot. Serve straight away with your favorite dipping sauces. Cherry tomatoes are bite-sized flavor bullets that are just as good straight from the garden to your mouth as they are cooked with pasta.

We walked all over Daniel Orr’s expansive garden in Columbus, Indiana, picking tomatoes here and there, along the chain-link fence and next to a flowerbed. They tend to spread themselves all over the place from season to season. This makes cherry tomatoes volunteers in the garden.

They grow quickly, so it’s easy to get overwhelmed with all the tomatoes you suddenly have waiting to be eaten. “When you have a whole lot of tomatoes right out of the garden, you need to use them up somehow,” he said.

• Salt and pepper to taste

Return to heat and add garlic. Cook just until the skins split.

Pour over a tart shell. Sprinkle with Parmesan cheese. Or serve over pasta, meat, or fish. Add to vegetable plate. If you want to jazz up this recipe, serve the juice in salt-rimmed glasses—just like a margarita. You can freeze the leftover puree into watermelon ice cubes.

Place the watermelon flesh in a blender. Add water and blend until pureed.

Slice the mint leaves into thin ribbons and place them at the bottom of frozen glasses. Pour watermelon juice over top.