Many Bloomington families take advantage of the summer months to travel outside the Hoosier state, and local travel agents say the kinds of trips residents take are as eclectic as Bloomington itself.

“Cruises are very popular,” says Mia Martin from The Travel Authority, which specializes in European and luxury trips. “We do a lot of custom vacations—a few days in London, a few days in Barcelona, maybe a cruise.”

Ireland has been a top spot for those traveling abroad, says Cindy Groner of AAA at 2310 N. Walnut. For families traveling in the United States, Disney World and Universal Studios in Orlando, Florida, remain popular. “We’ve also had quite a few families hitting the national parks, planning drives out West,” she says. “And so many families are going to Alaska.”

National parks and Alaska have also been in demand at Travel Leaders, according to Linda McClary. “For Alaska, people will do a seven-night cruise, then stay on land, going to Denali National Park and Anchorage or Fairbanks,” she says. She’s also seen a surge in extended families planning trips together at her office at 814 S. Walnut. “We’ve had grandparents with their grandkids, or siblings with all of their kids.”

With online options available, using a travel agency to plan a trip may seem like a thing of the past, but Groner says she is seeing more people seeking her services. “People were going online for a while,” she says, “and now they’re coming back to travel agencies.”

Martin encourages those planning a trip to come by The Travel Authority at 421 E. 3rd St., to look at brochures and get their questions answered. “What customers find is that when they’re researching online, it’s too complicated and they want our help,” Martin says. “With us, you can trust the product and the outcome of the trip.”

Martin, Groner, and McClary all agree that one of the biggest advantages of using a travel agent is having a person to work with every step of the way, not only while planning but to help out if something goes wrong. “By using us, you have an advocate,” McClary says. “You have someone in your corner.” 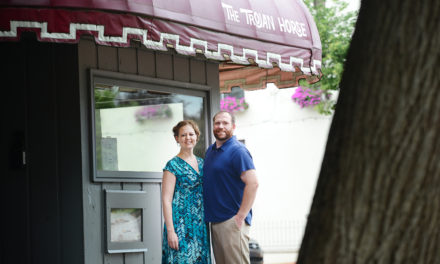