Artist’s rendering of the north exterior of the new arts center being developed by David and Martha Moore at the corner of Fourth and Rogers streets.

The corner of Fourth and Rogers streets is a 10-minute walk from the downtown Square, Bloomington’s traditional nucleus of arts and entertainment. But David and Martha Moore, co-owners of Pictura Gallery, a fixture on the Square for a decade, are developing a new gallery and event space they hope extends cultural entertainment to the city’s Near West Side.

In 2016, the Moores bought the unused building at 505 S. Rogers St., across from Rainbow Bakery. Renovations include an art gallery, a 200-seat performance space, and a smaller library space suitable for meetings, seminars, and film screenings. A parking area will be converted into an atrium entrance and outdoor garden.

“The performance space will be flexible,” David Moore says. “We’ll do music, contemporary dance, readings—all sorts of performances. We’ll be configurable and spontaneous.” They hope to officially open in April 2018.

The venue will combine performance and visual art with a curator’s sensibility. Moore says performers and artists will be chosen for the quality of their work and the way they blend with one another.

The Moores plan to use the acronym FAR (for Fourth And Rogers) in branding the space—and potentially the neighborhood, if adjoining businesses like Rainbow Bakery, the Lotus Education & Arts Foundation, the arts center in the I Fell Building, and the record label Secretly Canadian, adopt it.

In addition to arts events, the center will host weddings and receptions. Food and drink service will not be provided, but the plan includes a kitchen to support catering.

Martha Moore, who heads the committee that organizes Bloomington’s monthly Gallery Walks, hopes the new venue will be on that circuit. “It’s a little off the Square,” she says, “but in cities like New York, people walk that distance without hesitating.” 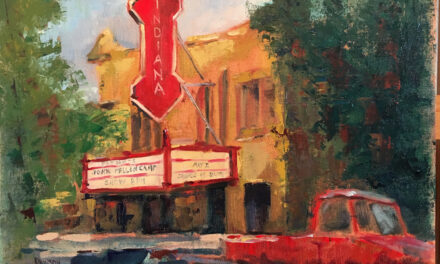