When Bicentennial Plaza at the Indiana Statehouse was being renovated in 2016, the call for public art proposals presented a challenge. Artists’ ideas were to be based on the idea of either “eternal flame” or “living time capsule.” Bloomington sculptor Dale Enochs says that once he decided on the “really abstract concept” of the latter, he set out to design something dynamic that would connect the past with the present.

“I found myself asking, ‘What does time mean?’” Enochs says. In September 2016, installation began on Time Flow, a sculpture that pairs notions of time as both a river and an infinite loop. Enochs submitted the work with Tom Fansler, CEO of Indianapolis construction company Smock Fansler; it was one of 104 submissions received through a national call for artists. Another sculpture, Lux Aeterna (Eternal Light), by New York artist Osman Akan, was also installed on the plaza.

Time Flow is one of 32 large-scale public works Enochs has created internationally. The artist says its portal shape is “indicative of moving from one point in time to another.”

During the Women’s March in January, Enochs began getting texts and email messages from friends in Indianapolis as marchers rallied around, climbed through, and sat on Time Flow.

“I loved seeing that interaction,” Enochs says. One of the texts he received was from Miah Michaelson, deputy director of the Indiana Arts Commission (and former Bloomington assistant director for the arts), who wrote, “This really puts the public in public art.”

Since earning his M.F.A. from Indiana University in 1981, Enochs has completed eight local public artworks, including Break Away at the Bloomington Transit Center and Bloomington Banquet on the B-Line Trail. He currently has three more public projects planned, and additional local and international public projects are on the horizon. Enochs will hold a one-man show at Long-Sharp Gallery in Indianapolis beginning September 8. The sculpture was a point of interest for participants during the January 2017 Women’s March in Indianapolis. Courtesy photos 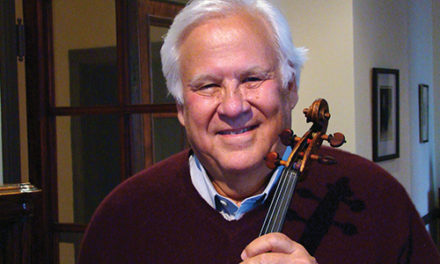 Salaam Has Found Its ‘Perfect Balance’