Hannah and the Dark Night of the Soul by Michael McAuley

This year, the group will hold the 2017 Indiana Artists Member Exhibition and Centennial Celebration at the Brown County Art Gallery from November 5–December 17. Painter and Bloomington resident Bob Kingsley is this year’s judge.

Over the years, the group has helped with the preservation of important Hoosier works, including the T.C. Steele State Memorial and murals from Wishard Memorial Hospital in Indianapolis, which had been painted by early members of the club. They also promoted their own artwork, with annual juried exhibitions at a variety of locations around the state. In 1935, they settled into a long tenure of exhibitions at the L. S. Ayres Department Store auditorium in downtown Indianapolis. Since Ayres’ closing, starting in 1994, the club’s annual Indianapolis exhibits have been held at the Indianapolis Museum of Art.

Last year, the organization’s name was simplified to Indiana Artists, reflecting its role as primarily a professional, rather than a social, organization. Ranging in age from their mid-20s to as old as 90, more than 150 artists are now members, including many from the Bloomington arts community. As in the beginning, the members continue to be working professionals, but they are no longer exclusively painters.

Sculptor and Bloomington native Michael McAuley, creator of the Hoagy Carmichael bronze sculpture on the Indiana University campus, is the group’s current vice president. He explains how the organization maintains highly selective standards: “It is about the artists’ track record of being shown and accepted into juried exhibitions. They are voted into membership due to their ability, expertise, and a commitment to the world of art.”

Indiana Artists is an all-volunteer group with no regular meetings. It continues to sponsor juried art exhibitions. Currently it offers four annual exhibitions, with more than $20,000 in awards.

The opening of the 2017 Indiana Artists Member Exhibit is still nearly a month away, but we’ve got a preview of the artwork that will be on display beginning November 5: 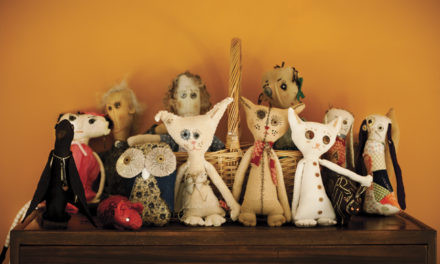