Bloomington actress Greta Lind in what may or may not be a dream sequence. Courtesy photo

In the fall of 2018, if all goes according to plan, audiences will get their first look at The Klaxon, a 47-minute art film about identity and race in America, shot in 360-degree video, largely in Bloomington.

Nikita Shokhov, 29, and Anna Evtiugina, 31, the married Russian couple who produced and directed it, are still discussing how the film will be exhibited. The goal is for audiences to have an immersive experience, delivered either through a virtual reality headset or multi-wall, 360-degree projection.

“The language in the film doesn’t have a typical narrative structure,” Evtiugina says. “A lot of it is really meant to focus your attention on the sound of the words, not the words themselves.”

Core scenes were shot in November. The protagonist is situated on a bed within surreal, claustrophobic sets built in a performance space at the Ivy Tech John Waldron Arts Center, and in an ornate parlor at the Indiana Memorial Union. Most of the cast are local amateur actors with whom Shokhov used a guided improvisation technique he developed for films exploring controversial issues in Russia. Additional scenes will be shot in New York City and along the New England coast.

The final cut also will feature animated ants. They’re suggested by the script in one of its more dreamlike sequences.

The script is based on a play by American writer J. William Howe, who Shokhov met at a Buddhist monastery in California. The play originally focused on a female character struggling with identity. Shokhov and Evtiugina added their intention to deal with race by casting an African American protagonist.

The text is abstract, written in several modes, alternately poetic, mathematical, and casual. The central text of the film is the monologue of the main character, understood to be a black woman, but played by several actresses, including Greta Lind, a Bloomington-based actress who is white.

“I really related to the idea of different modes of language,” says Lind, who acted in two Hollywood films in 1993, but hadn’t been in front of a camera since until agreeing to perform in The Klaxon. “The text was difficult, but I just rolled with the experience and trusted Nikita as an artist.”

The project was conceived and funded with a November symposium held at the Indiana University Neal-Marshall Black Culture Center entitled “The Art of Becoming Black in America.” It was funded by grants and in-kind aid from Indiana Humanities, IU, Ivy Tech, the Puffin Foundation, and Blockhouse Studios.

Shokhov and Evtiugina are digital nomads who have lived in the United States for two years while Evtiugina worked on her master’s in arts administration at IU. Shokhov is a photographer and filmmaker whose projects have included art films, multimedia projects, and irreverent photo essays on Russian life in the Putin era. While living in Bloomington, he has worked as a commercial photographer and photojournalist, taking assignments with Russian media and Bloom Magazine.

It is unclear where Shokhov and Evtiugina will go after The Klaxon premieres. “We go from project to project,” Evtiugina says. “We’ll see where life takes us.”

To view images of scenes for The Klaxon, see the photo gallery below. Courtesy photos (Click on the photo below to start the slideshow. Use the on-screen arrows or the arrows on your keyboard to navigate forward and backward.) 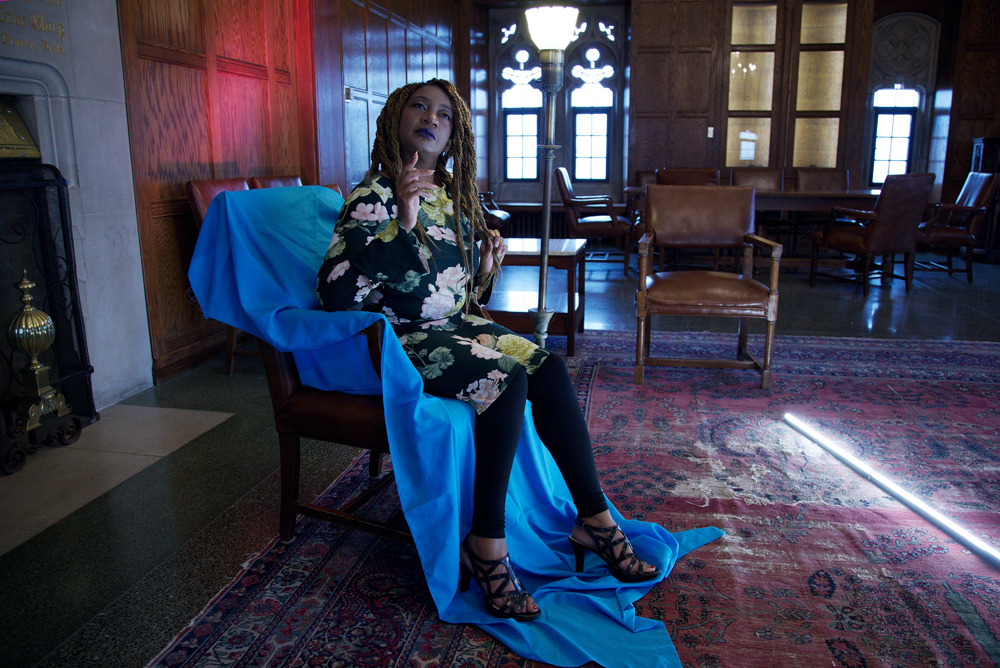