IU Press has just reprinted two children’s books with a simple plot: families go for a walk. Meeting Trees and Crawdad Creek by Scott Russell Sanders were originally published in 1997 and 1999 by the National Geographic Society. Sanders, a Bloomington author who has led many a reader on walks through familiar southern Indiana quarries and woods, based the books on the Ohio rambles he took with his father and older sister when he was a boy.

Sanders explains that the books are more advocacy than reminiscence. “Because I had a country upbringing and bonded with the earth by playing outside and turning over rocks and climbing trees, I wanted to write children’s books that would incite them to go outside,” he explains.

Although the books had been out of print for 20 years, Sanders says that whenever he traveled, librarians told him his books were still on their shelves. “The idea that there are children across America who are reading my books is a deep delight,” Sanders says. “I like grownup readers, but there’s something special about children. Kids won’t remember the name of the author or the illustrator, but they’ll remember the story and the pictures.”

The memorable illustrations in both books are by Robert Hynes, who has drawn posters for the National Park Service. “Something that intrigues me about Hynes is that he has drawn a lot of wildlife commemorative stamps,” says Sanders, who collected stamps as a child. Hynes draws trees and animals with such accuracy that parents and kids can take the books with them on walks to identify mulberry trees or dragonflies.

Although the books aren’t preachy, they contain some memorable lessons. For example, as the son moseys along through the woods in Meeting Trees, he heeds his father’s advice: “Trees don’t rush about … so why should we?” And in Crawdad Creek, the two children begin by panning for gold and fantasizing about what they’ll do with their sudden riches. But by the book’s end, they have forgotten all about gold nuggets as they marvel over natural treasures like fossils and salamanders—exactly what Sanders hopes a new generation of readers will do. 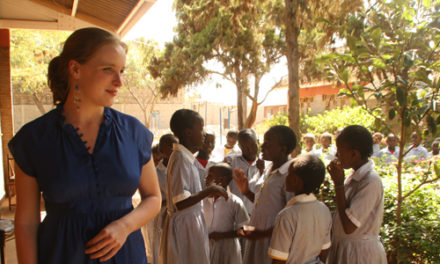 How STARTALK Swahili Program Changed the Course of a Young Life