If Jo Ann Vogt, 62, could make everyone read just one book, it would be Being Mortal by Atul Gawande. “It is actually a book about living and how to live,” she says. Vogt does most of her reading in months when she can comfortably sit on her porch swing, and in summer she will read a book a day, mostly nonfiction. When we spoke, her world had been upended by a neighborhood cat who appeared at the window and antagonized her own three cats, who then redirected their anger toward one another. To restore harmony, Vogt said she put down her current read (The Omnivore’s Dilemma by Michael Pollan) and picked up CatWise by Pam Johnson-Bennett.

Steve Brewer, 59, has been having a reading renaissance since he decided to consume less news. “I find myself arranging my day so that I can get to my reading chair sooner,” he says. When we spoke, Brewer was reading With the Old Breed: At Peleliu and Okinawa by E.B. Sledge, a memoir of a Marine in the Pacific theater during World War II. “It’s a bit tough to read because it doesn’t have some of the structural enticements, like suspense, that keep you reading a narrative, but I think that’s the very thing that makes it seem really honest.”

Bethany Turrentine, 37, has been on a fantasy kick lately. “I like all of the different options for world-building that happen in fantasy,” Turrentine says. When we spoke, she had just finished the Tearling trilogy by Erika Johansen, and said she would start the Rivers of London series by Ben Aaronovitch as soon as a library copy became available. Turrentine only reads library books and will wait for a physical copy rather than read an e-book. She also recommends Life Is So Good, a memoir by George Dawson (with Richard Glaubman), who learned to read when he was 98.

Host of Big Talk On WFHB

Michael Glab, 63, holds his hand at chest height to indicate the size of his current book queue. When we spoke, atop the pile were two books about the consciousness of octopuses, but he says they would be trumped by the book that just arrived—the 2019 edition of Baseball Prospectus, a 600-page collection of essays based on statistical analyses of players and teams. “I read these essays and I think about summer. It brings me to another place—a better place,” Glab says. 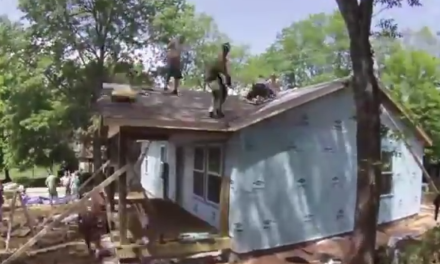