One of the trends taking a firm foothold in craft brewing is aging beer in bourbon barrels, which add richness and complexity. Some of these beers can be pricey. That’s because of the need to procure bourbon barrels in an increasingly competitive market, then store the beer for months of aging without any guarantee of a successful end product.

Brewers usually start with standard dark styles—porters, stouts, and barleywines—and put some aside for four to 12 months, a process that allows the beer to take on the bourbon flavors of vanilla, caramel, and toffee, along with hints of oak from the barrel. The flavor intensity and profile depend on various factors: the freshness of the barrels, the length of aging, and the characteristics of the original beer.

My local favorite comes from Bloomington Brewing Co. Its Barrel Aged Java Porter adds a subtle bourbon warmth and character to a solid beer. It has a brown-black color and a strong coffee aroma with hints of dark chocolate and a bit of cherry. Dark chocolatey malt flavors lead the way, with coffee flavor drifting in and taking up most of the mid- and aftertaste. The bourbon flavor is subtle, adding a hint of toffee for a nice balance. The hops are also subtle, adding an earthy character and slight bitterness, but they are clearly there in a supporting role. The bourbon character provides a slightly stronger alcohol taste, which is a bit surprising since this beer is only 5.1% alcohol by volume (ABV).

While Upland Brewing Company’s Wood Shop is devoted to aging its sour ales (a different world altogether), its brewers have been playing with barrel-aged variations of Teddy Bear Kisses, its award-winning imperial stout. Their latest experiment involves aging this beer in bourbon barrels with cacao nibs and orange zest. Teddy Bear Kisses pours inky dark, its aroma and flavor dominated by dark malts and orange. At 11% ABV, there is a strong alcohol warmth, and while I get a bit of bourbon flavor, it mostly adds character to the dominant malt and orange. Enjoy the complexity and uniqueness of this variant, but don’t expect bourbon to lead you through the experience.

For a more intense bourbon flavor, try a beer from Founders Brewing Company’s barrel-aged series. I prefer this Grand Rapids, Michigan, brewery’s Underground Mountain Brown, an imperial brown ale brewed with Sumatra coffee and aged in bourbon barrels. Deep brown in color with a slight ruby tint, it has a heavy coffee aroma laced with bourbon, plus a nice touch of chocolate-covered cherry and vanilla. The bourbon’s toffee and vanilla flavors play more dominant roles in this beer, with coffee coming in second. The beer has a more aggressive alcohol flavor and warming sensation—at a significant 11.9% ABV—making this a sipper.

With so many options in bourbon barrel–aged beers, finding one with the flavor profile you prefer might take some exploration, but it’s a task worth taking on. So, sit back, sip, and savor this wonderful brewing trend. A Different Kind of Pasta—With Crunch! 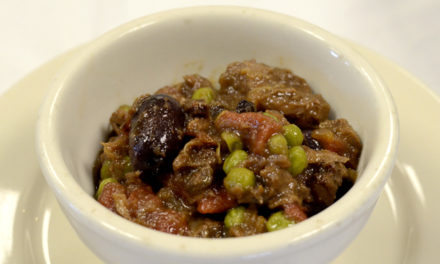