The Indiana Memorial Union (IMU) pulsates with life—students circulate between cafés and study nooks, visitors bustle in and out of the Biddle Hotel, and, up marble stairs and tucked around a corner on the main level, “Hidden Hoosiers” resurrects voices from the past.

Alex Ruschman, a student research intern with the Indiana University Office of the Bicentennial, took over the “Hidden Hoosiers” project from her predecessor Kayla McCarthy, now a research assistant at the Chicago History Museum. Their shared vision resulted in the transformation of five phone booths, originally installed in 1959 as part of the hotel, into interactive exhibits featuring lesser-known figures of IU’s history.

In order to uncover these previously unknown individuals, Ruschman and McCarthy had to dig deep and follow, literally, paper trails. “The first steps I took were going onto IU Archives [Online] and searching employee data, and then I found a couple other names just through digging around in this archive closet at the IMU,” Ruschman says.

Passersby can stop by the exhibit any time and pick up a red phone connected to a boombox to listen to each Hidden Hoosiers’ story told in first-person, as if they were really there. Five individuals are featured each semester. Last fall, two of the stories included how Henry Hammond broke racial barriers when he was made an honorary member of Sigma Chi, and the adventures of Emerson Elkins, an IU student in the late 1930s before he enlisted in the Army Air Corps.

This semester, visitors can listen to World War II-era tales from James E. Patrick and learn about Wilma Gibbs Moore’s many roles, including as head of the IU Black Culture Center Library.

“This has gone really smoothly, it’s gotten a lot of good feedback,” Ruschman says. “I wouldn’t be opposed to keeping this going.” 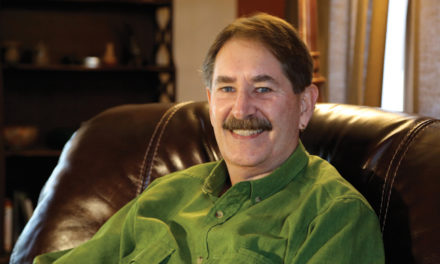