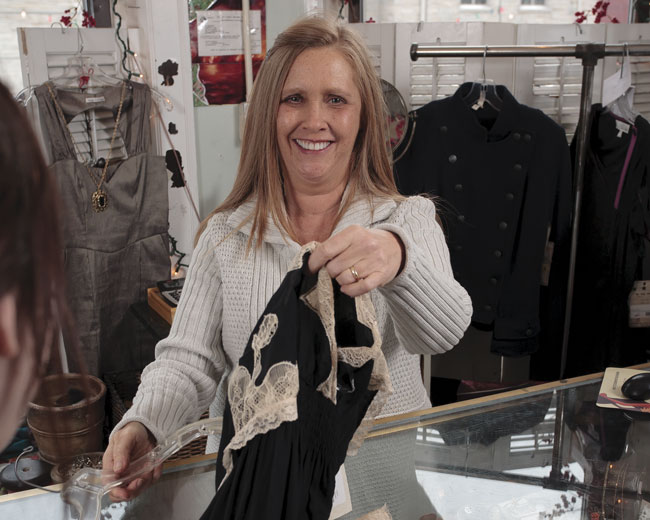 It may be hard to believe that a retail shop has existed on East Kirkwood since 1976, but clothing boutique Cactus Flower has survived both big changes and big chain stores.

Selling vintage and new fashions on two floors in Kirkwood Manor (322 E. Kirkwood, in the same building as Soma Coffee House and Laughing Planet Café), Cactus Flower was born when owner Jill Schaffer rented a small art studio on the second floor and began selling jewelry and other items she made herself. At the time, she was designing southwestern jewelry, hence the store’s name.

Schaffer could never have imagined that 35 years later her shop would still be in business. But as more rooms became available upstairs, Schaffer expanded to include vintage clothing. Now, she says, “I love clothing more. At one point, I cleaned out my own vintage closet and put it on sale.” In the mid-80s, Schaffer began selling new clothing, keeping an eye out for pieces with vintage inspiration as well as items that were different and affordable.

Finding new ways to keep the business going was just one of many challenges. The store caught fire in 1995, and Schaffer lost all her merchandise and equipment. “Family, employees, and friends magically appeared the next day to help in any way they could,” she says. “They were the only reason I was able to re-open.”

Since 2003 Cactus Flower has included the downstairs corner of Kirkwood Manor, where shoppers can find new clothing and accessories from names such as Tulle and Free People. Upstairs, clothing dates back to the early 1900s. “College kids are intrigued by fashions from the 1980s,” Schaffer says. “Other customers are into Audrey Hepburn—classically beautiful.”

Schaffer credits her supportive family, loyal customers, and fun employees for the shop’s longevity. “People want to shop someplace where they know who you are,” she says. “I have a customer who says her dad would bring her in as a baby.”