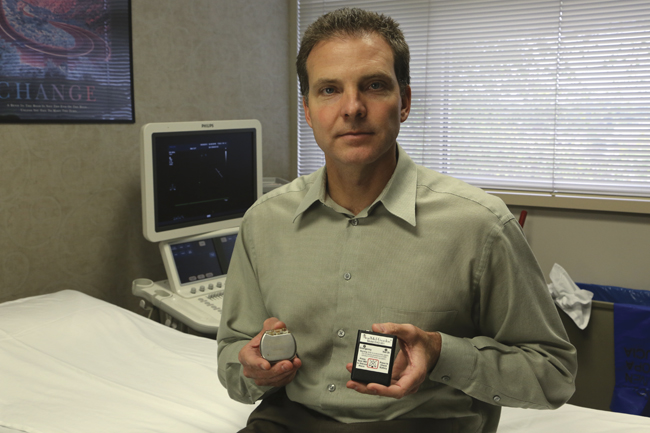 Imagine a device that could warn you of an impending heart attack before you were aware of any symptoms. Then imagine that the device is implanted in your chest, monitors your heartbeat, and sends you a signal when there is an abnormal change.

That device, called the AngelMed Guardian, has been implanted in three Bloomington-area residents as part of a nationwide clinical trial.

Dr. John Strobel, a cardiologist at Premier Healthcare in Bloomington, says the Guardian is currently being tested only in patients who have had a heart attack or open-heart surgery in the preceding six months. “That’s when they are at high risk for a second attack,” he says. “We want to identify them before that happens.” The goal is to implant the device in 20 patients locally. The procedure takes about an hour, and patients spend one night in the hospital.

The Guardian is slightly larger than a half-dollar and “the thickness of a skinny cell phone,” Strobel says. If it detects a change in the heart, it will vibrate in the chest and send a signal to an external pager that beeps and flashes a small light. There are two distinct warnings. “The ‘call doctor warning’ detects subtle, less urgent changes,” says Strobel. “The ‘high emergency warning’ means call 911 or go to the hospital.”

More than a million people in the U.S. have heart attacks every year, according to the National Institutes of Health. About half of them die, often because they don’t get help immediately.

Julia Cootes, one of Strobel’s patients, had a heart attack last January at the age of 39. “I work in the medical field, and I didn’t even know I was having one,” she says. “I had a little twinge in my chest and a bit of pain in my left arm, but then I felt fine.” When Cootes finally decided to go to the emergency room at her local hospital, she was immediately transferred to IU Health Bloomington Hospital for surgery and had two stents inserted into her clogged arteries. She heard about the AngelMed study, met the criteria, and decided to participate. “I wanted peace of mind,” she explains. Even though she is in the control group for the first six months, Cootes says “the data they collect will be helpful to others.”

The Guardian is manufactured by Angel Medical Systems of Shrewsbury, New Jersey. Beth Rogers of Angel Medical says Bloomington is one of 75 clinical sites throughout the U.S. where the device is being tested in 500 patients. An earlier pilot trial showed promise, Strobel notes, and this study is designed to demonstrate that the device is beneficial. The test is important, he says, “because so many patients have no or minimal symptoms of a heart attack, and early detection and early treatment can save lives.”