The departure of Max’s Place left a pizza-shaped hole in the downtown Square, a void which Adam Sweet, chef and owner of King Dough, says he plans to fill and then some. His new eatery will feature a menu with a focus on wood-fired pizza plus house-made gelato, sandwiches, and gourmet salads. Sweet says the goal is to create a “casual, really high-quality place to eat and hang out that’s not going to break the bank.” 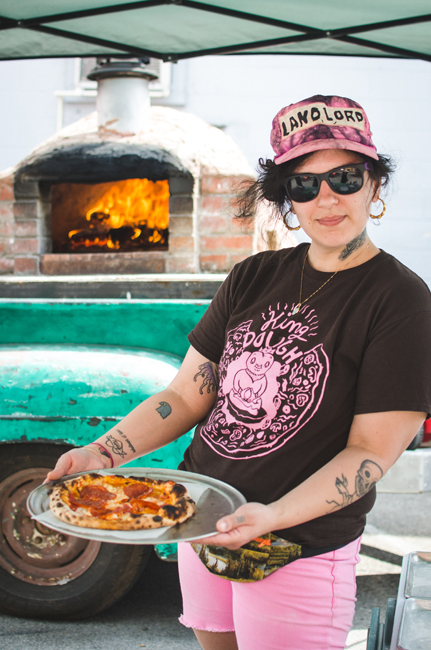 King Dough will be Sweet’s second pizza restaurant. He co-owned and managed ZAZA Fine Salad & Wood Oven Pizza Co. in Conway, Arkansas, before selling his shares and relocating to Bloomington. Pizza has always been his passion, and that has led him to dabble in culinary areas that “just make pizza better,” he says. In Arkansas, he spent time baking with Boulevard Bread Company and moonlighting in a friend’s butcher shop, making sausages and learning how smoke and salt affect meat. These skills will be put to use at King Dough, where he and his staff will cure bacon, make sausage, and bake their own bread. Sweet is especially excited about the gelato station, which will be run by his wife, Alicia. Made from scratch every day, the gelato will feature ingredients from local partners, such as beans from Hopscotch Coffee and vodka from Cardinal Spirits.

“Pizza is food for the people. It’s fun. It should be interactive,” says Sweet. With that in mind, he is changing up the restaurant’s layout. A new open kitchen will run the length of the west wall. Diners will be able to watch as their pizzas cook in an Italian Pavesi oven, which Sweet calls “the Cadillac of pizza ovens.” The wood-fired Pavesi is being shipped here from Italy and will be built on-site. It will cook at 800–900°F, and, under that concentrated heat, light-and-airy Napoli-style pies will be ready in just three minutes. The menu will feature seasonal specialty pizzas, such as Brussels sprouts and smoky bacon, as well as vegetarian, vegan, and gluten-free options, with toppings such as butternut squash and arugula. A pizza for two will cost $10–$15.

The King Dough opening is set for July, and Sweet plans to serve pizza seven days a week, with brunch on Sundays. In the meantime, King Dough will be selling gelato wholesale and using a mobile wood-fired pizza oven to cater local events. Adam Sweet with his portable oven. Photo by Aubrey Dunnuck