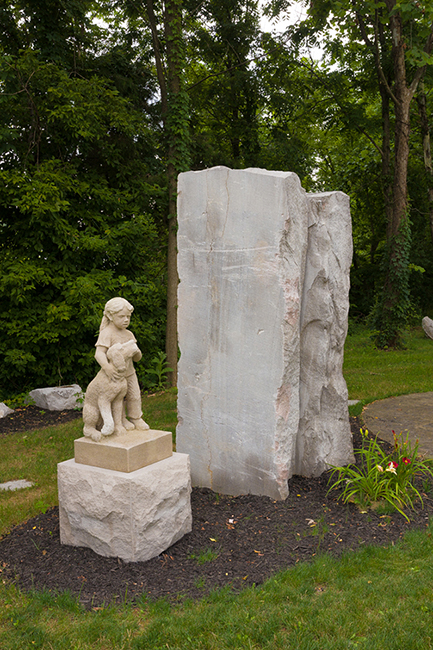 “Puppy Love” by sculptor John Fisher is the most prominent work of art along Ellettsville’s Heritage Trail. Photo by James Kellar

While it’s just seven miles northwest of Bloomington, Ellettsville may not be on everyone’s radar. But within its small city limits is a downtown that has been listed in the National Register of Historic Places since 2006.

Several public and private groups contributed to the revitalization that inspired the historic downtown district designation, but the nonprofit group Ellettsville Main Street, Inc., is largely responsible. The group was established in 2000 when plans to widen Indiana State Road 46 inspired a group of citizens to wonder what would happen to downtown Ellettsville after the planned four-lane highway sliced through the center of town.

“When the Department of Transportation initially planned the highway, they had not planned for a stoplight at the intersection of Sale Street and 46. Their purpose was to move vehicles through town quickly,” says Leasa Siscoe, vice president of Ellettsville Main Street. “Our mission was to stop or slow down the vehicles so people could safely cross the road.”

Initially, the group’s primary focus was rejuvenating and preserving the historic downtown area while revitalizing the town’s sense of community. Its most recent accomplishment involves the creation of a partnership between private and public groups that successfully executed the Heritage Trail project, similar to Bloomington’s B-Line Trail.

Heritage Trail stretches more than 2,000 feet along Jack’s Defeat Creek. Pieces of limestone donated by Bybee Stone add character to the trail, which is marked with flowers at one end and a sitting area and the town’s stone gateway at the other. Californian sculptor John Fisher designed the trail’s most prominent piece, a limestone carving, Puppy Love.

“Part of this process has been imagining the possibilities and asking ‘What if?’” says Siscoe. For more information, visit magbloom.com/mainstreet.