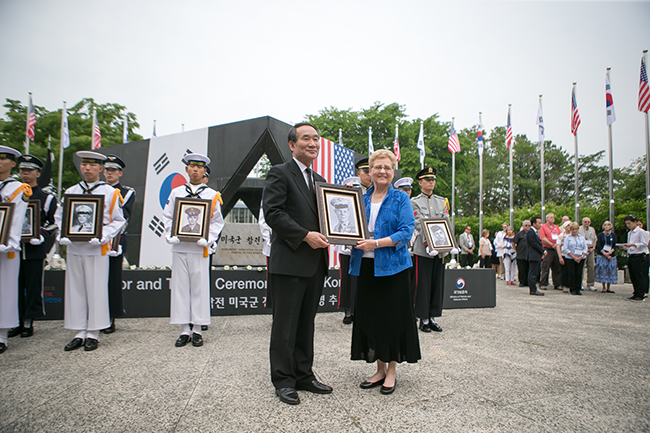 Minister Park Sungchoon presents Brenda with a portrait of her brother, Daniel Dulin, at a ceremony held by the Ministry of Patriots and Veterans Affairs in the Republic of Korea. Courtesy photos

When Brenda Lott was 6 years old, she learned that her brother, Cpl. Daniel Dulin, had been killed in action in the Korean War. Lott says the family didn’t know where or how Daniel died, and they assumed his body had not been found nor buried. While growing up, Lott says,
she carried a picture of Daniel with her, the same photo that sat in a place of honor in her family’s living room.

“He’s always been a thread in our family,” she says of her brother, who was 17 when he enlisted and just 18 when he died. “He watched us grow up.”

For years, the family thought they would never know anything more about Daniel’s death, but in 2011, Lott received a phone call from a U.S. Army investigator seeking Daniel’s next of kin.

“Since then, we’ve received all of his medical records, we know where he was first buried in Korea, and we’ve talked to someone who was with him just before he was killed,” Lott says. She and her family continue to gather more information, keeping in contact with the military and attending the Defense POW/MIA Accounting Agency’s annual briefings for families.

In May, Lott, 72, who moved to Bloomington 10 years ago from Virginia with her husband, Ken, visited the Republic of Korea as part of a group of Americans representing 22 service members killed in action or listed as missing in action during the Korean War. She was accompanied by her sisters, Hilda Lee, 69, and Linda Broadway, 63.

The group was hosted by the Republic of Korea’s Ministry of Patriots and Veterans Affairs, which made the trip affordable by discounting airfare and charging a small fee for arranging the program. Lott says everything else — accommodations, transportation, meals, and excursions — was free of charge.

Lott says that although the Korean War was long ago, it is not forgotten by the South Korean people. “Everywhere we went, everyone — shopkeepers, people in elevators, people on the street — would thank us for their freedom,” she says.

The week was full of events and ceremonies honoring the fallen soldiers. For one ceremony, Lott was asked to write a letter to her brother and read it aloud. In it, she wrote “the South Koreans did not know your name” but “they have never forgotten your sacrifice.” When the group visited the Wall of Remembrance, Lott was surprised to find Daniel’s name engraved on the stone. She took a rubbing and says it is a treasured memento of her journey.

Before the trip, the American families were asked to send military photos of their loved ones. During their visit, they were presented with framed portraits at a special tribute ceremony. It was a touching gesture, says Lott.

“It was like I held him, like we had the service for him we never had,” Lott says. “These are the people who attended the funeral for my brother. We call each other family now.” 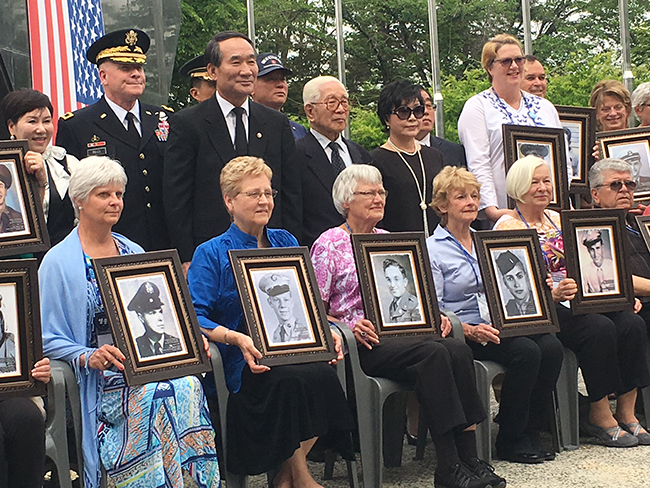 Brenda Lott (second from left) at a ceremony with the family members of service members killed or missing in action in the Korean War. Courtesy photo