Armies of Space Marines are assembled in a small ranch house south of Bloomington, brought to life by Brandon Palmer, miniatures artist. After painting and photographing the models, Palmer will ship them off to do battle on tabletops across the country and around the world.

Palmer, 32, paints figures for the popular strategy game Warhammer, a distant cousin of Dungeons and Dragons. First released in 1983, Warhammer (Games Workshop, Nottingham, England) is based in a Tolkien-like fantasy universe with a complex, sprawling backstory.

There are thousands of miniature painters, and games like Warhammer represent an important market. Palmer is an elite painter — but he hesitates to call it art. “These are really toy soldiers, taken to an extreme,” he explains.

Palmer discovered the game at age 13, at the Game Preserve at 101 W. Kirkwood. He stopped playing and painting when he went off to Indiana State University to study graphic design, but during his senior year, he started painting models again.

“I would post pictures online, and people kept wanting to buy the figures,” he says “I sold some on eBay, and realized that if I could make money painting Warhammer figures, I’d be happy doing that.”

Palmer stuck to small projects until he came across AdeptiCon — an annual gaming convention that draws Warhammer enthusiasts from around the world for tournament play. After he began winning awards for elaborate Warhammer dioramas at AdaptiCon, hobbyists discovered Palmer’s work and offered him large projects, sometimes for 300 models or more.

A commission starts with an email requesting specific models with a specific color scheme. He estimates a typical client has between $3,000 and $4,000 invested in models, and may pay him $6,000 to $12,000 to paint them. It may take two to three years for him to paint a large army.

In 2014, Palmer, a lifelong resident of the Bloomington/Ellettsville area, bought the house formerly owned by his grandparents, where he now lives, and paints.

“I’m a big kid, and everything I create comes from inside my head,” Palmer says. “It’s a refuge from the real world. It takes a lot of self-discipline. But I could go on doing this forever.”

For more information and to see a gallery of Palmer’s work, visit gmmstudios.net. 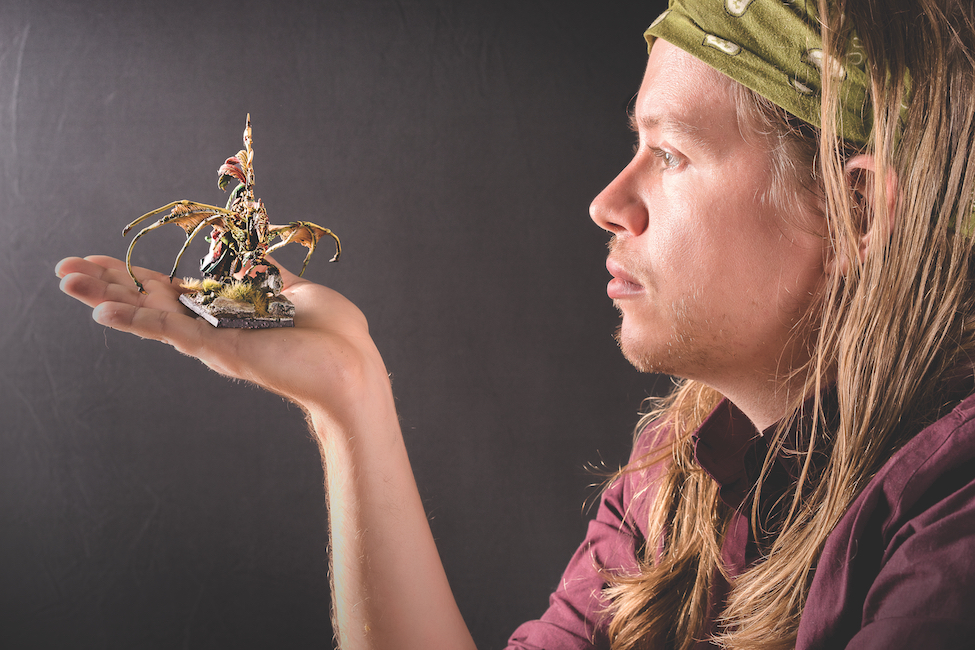