‘How Do You Have Fun with Cancer’ and Create a New Paradigm for Chemo? On three occasions, Lauren Lane Powell was diagnosed with ovarian cancer, and three times she defeated the disease. Now, along with IU Health Bloomington Hospital, she hopes her most recent experiences can be used to help others.

During her first two bouts with cancer (in 2012 and 2014), Powell’s parents gave her moral support, but they both died before her third diagnosis last year. Her response this time was to create an alternative support system that includes music, essential oils, meditation, and other unconventional approaches, as well as a group of friends that she calls her “chemo-sabe” (a take on the term of endearment used by the fictional character Tonto when referring to the Lone Ranger).

“I’m a voice teacher,” she says. “I knew I had to reach out to my community, especially my fellow singers, and then create the music that went along with this. All of the people I sing with are either in my choir or come from my church or have had lessons with me.”

While her approach is unconventional, it has allowed her to find a peace that was otherwise missing. “Somebody asked me what happens if chemo doesn’t work this time; what happens if I die?” Powell says. “Well, I’m having fun every week, that’s the key. Embracing death has been a part of this, but how do we do that with fun? How do you have fun with cancer?”

Her fun begins with music. “Two hours of singing changes everything,” she says. “During the pre-meds, we do up-tempo music, fun songs, happy-little-fishies-eating-all-the-bad-cells-away.” Then, she says, they bless the bag containing the chemotherapy drugs. “We do reiki over it, then we go into meditation and keep singing.” The treatment room is decorated inside and out, and friends, as well as the nursing staff, leave inspirational messages throughout each session.

Accepting her disease was also key in helping Powell get through it. “Acceptance is in the now,” she says. “Whatever I’m going through right now, whether it’s fatigue, whether it’s a little bit of nausea, it’s ‘how can I embrace where I am, what I’m doing.’”

And now that she’s again in remission, she and her chemo-sabe hope to use their experiences to provide the same environment for other chemotherapy patients. “I have gotten to use everything I have ever learned—through vocalizing, through my spiritual practice, through meditation, through what I teach—for all three of these cancer dances,” she says. “Now I’m excited to use what I’ve learned to help other people and to see how my own life can expand through what has obviously been such a gift. I see this as a pioneer project for all over the country for changing the way chemo is done.”

It’s an idea that caught the attention of Linda Lewis, chief nursing officer with IU Health Bloomington Hospital. “I’ve been a student of holistic nursing since 1999, before it was popular,” she says. “I was a critical care nurse and I would never understand why some patients with a tremendous amount of trauma survived and did really well, and others who had very little trauma did not make it.” She concludes, “It’s not just the injuries, it’s the psyche.”

In May, the hospital began an integrative healing arts program. Funding is through the Bloomington Hospital Foundation, which agreed to put the first 25 clinicians through the year-long program. When they finish, participants will be nationally certified in holistic practice.

“Now I know why I got cancer the third time,” Powell exclaims. “There are bigger reasons than it just coming back. I’m in the right and perfect place.”

Lewis agrees. “You are,” she says. “I’ve always had this belief that people with like-mindedness cross paths and create this energy. That’s what’s happening here in Bloomington. Many people are looking at how we can create a better healing environment by opening up our own minds and hearts to what healing means.” 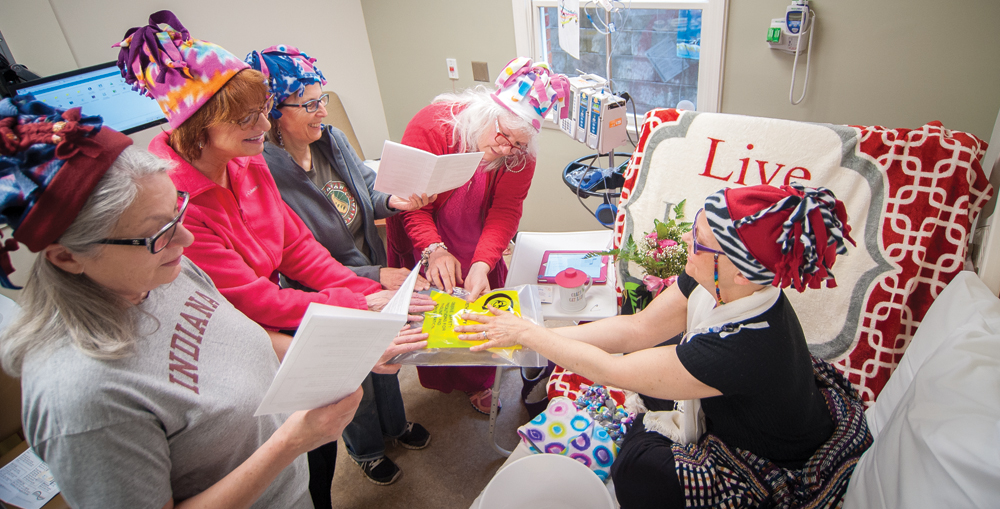