Flowers are reliable symbols of affection. According to a Society of American Florists survey, 82 percent of women feel that flowers are a universal sign of romance. Now, one might think that the members of this society are hardly an unbiased group, but it is indisputable that they are knowledgeable about the topic. The same survey found that 41 percent of women enjoy receiving flowers unexpectedly. 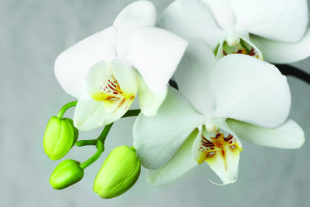 Potted flowering plants, like orchids, are an alternative to roses on Valentine’s Day. Photo by istockphoto.com/LeitnerR

In the month of February, it is not really possible to send flowers to either a woman or a man and expect to surprise them in a knock-your-socks-off kind of way. Whether a couple is in a long-term relationship or just in the beginning stages of one, there will probably be some expectation that flowers are likely to appear on St. Valentine’s Day.

When it comes to the timing of such a gift, sending or presenting them slightly before the day is considered appropriate, but it is never okay to give flowers after the 14th if one wishes to avoid being labelled a skinflint. There are, of course, exceptions to this rule. For example, a long-suffering grandmother or great aunt might excuse tardiness if the sender doesn’t usually give anyone anything at all, or is known in the family for being forgetful or gauche. Older relatives can usually rationalize quite well, so they are easily satisfied with any token recognition of their existence, unlike more recently acquired romantic partners.

But I digress from the important botanical issues at hand. A longer-lasting alternative to cut flowers, on St. Valentine’s Day or anytime, is a potted plant. Not just any old foliage plant will do the Valentine trick, however, so buy something with flowers and a bit of color and style. The most popular plant in this category is an orchid, and luckily, nowadays, they are quite reasonably priced. Purchase one with some open flowers and a lot of unopened buds, and it will look good for as long as three months—but note it will not provide any scent.

If perfume is important to you or your Valentine, cut flowers, such as stocks and roses, are still your best bet, but you will have to do the sniff test as the problem with modern flowers is that the scent has been bred out of them in favor of characteristics such as shelf life, form, and color. If scent is a deal breaker for your recipient, the solution is to buy a small bottle of perfume or aftershave and tie it, unopened, onto a stem among the flowers as an extra bonus.

Despite being armed with the valuable information provided here, you may, for some reason inexplicable to most traditional observers of this important saint’s day, decide not to purchase flowers for the object of your affection. In that case, do write a poem, present a case of champagne, make a dinner date, or at least buy a fancy card. And remember, the less expensive the card, the more effusive the words you write upon it will need to be. Think on these things and listen closely in case your honey drops some valuable hints in the days ahead.