Considering his international reputation as a fine-art printmaker and cofounder of Bloomington’s Echo Press, it may be a surprise to learn that Rudy Pozzatti might have become a doctor had it not been for a chance encounter when he was 17.

Pozzatti, 86, grew up in Telluride, Colorado, an area then known not for ski resorts but the gritty culture of gold and silver mines. His mother had come to Colorado by herself from her Italian hometown of Trento at the tender age of 13, invited by her uncle to help run a boarding house for miners. Several years later she married a miner who was also, coincidentally, from Trento.

As a child, Pozzatti developed a keen interest in drawing, though formal art instruction scarcely existed in the largely working-class town. With a scholarship to the University of Colorado, he imagined he would study medicine, but when the head of the art department happened to see his portfolio, she declared, “You’re going into art.”

After serving as an artilleryman during World War II, Pozzatti married his high school sweetheart, Dorothy, and completed an M.F.A. He taught printmaking at the University of Nebraska, and in 1952 a Fulbright Fellowship enabled him to take Dorothy and their first child to Italy. “I’ve never been the same since,” he says of the impression made on him by the abundance of centuries-old art and architecture. Pozzatti sold one of his paintings to writer and congresswoman Clare Boothe Luce, then-American ambassador to Italy, who later presented the piece as a wedding gift to her private secretary, Letitia Baldrige (etiquette expert and later First Lady Jacqueline Kennedy’s social secretary).

In 1956, Pozzatti was invited to apply for a position teaching printmaking at IU’s Department of Fine Arts. Bloomington has been his home base ever since.

In addition to teaching, exhibiting his work around the U.S., and working overseas—in the early ’60s he traveled to the Soviet Union as an arts ambassador for the U.S. Department of State and later studied woodblock cutting in Japan—Pozzatti founded Echo Press with fellow printmaker David Keister in 1979. Almost immediately, the press became a place where artists had their work printed, collaborated on projects, and presented guest lectures. The press closed in 1995, four years after Pozzatti retired from IU.

Rudy and Dorothy recently downsized, selling the house they designed, built, and called home for 51 years. But this artist has no plans to quit. “I simply want to continue my creative pursuits without the pressure of specific projects,” he says. 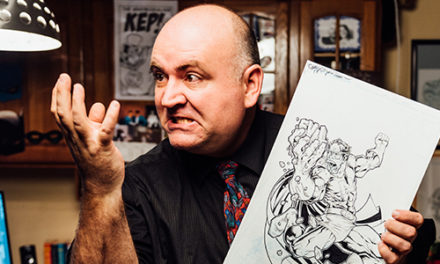