When Fred Glass became IU Athletic Director in 2009—the school’s fifth athletic director in eight years—he knew what he was getting into. After roughly a decade of turmoil, including the firing of legendary basketball coach Bob Knight, the death of beloved football coach Terry “Hep” Hoeppner, and NCAA violations leading to the bottoming-out of the storied men’s basketball program, Glass was tasked not merely with righting the ship but with healing an institution that had broken the hearts and eroded the trust of many of its supporters.

“I came into the job with my eyes open and didn’t have any delusions that it was going to be easy,” says Glass, 53, an IU alumnus who left a long and distinguished career as an Indianapolis-based lawyer and civic leader. “But I saw the challenge as a great opportunity to take IU Athletics from a low ebb and help establish a new golden age. At a certain point, you just have to bet on yourself.”

So far, Glass’ wager has paid off handsomely. On his watch the men’s basketball team has made the Sweet Sixteen two years running and last season won its first outright conference championship since 1993. In all, eight IU teams have won conference championships during the Glass era and five teams have captured NCAA titles, including last year’s men’s soccer squad, which won its eighth national championship. Glass has also overseen a significant bump in private fundraising, helping to fund a new athletic-academic center, a new baseball and softball complex, and a state-of-the-art strength-and-conditioning center.

Glass’ proudest achievement, though, and the one he says has made the most difference, is his “24 Sports, One Team,” initiative that lays out clear guidelines for all athletes, including playing by the rules, achieving academically, excelling athletically, winning championships, and integrating athletics with the broader university.

“It really drives everything else,” says Glass. “We bring in these great kids, but what are we trying to teach them? That’s what the creed is really about, and we work hard every day to make sure we’re actually doing what we say we’re going to do.”

A die-hard Hoosier sports fan, Glass has a deep personal connection to IU Athletics beyond his professional duties. He met his wife, Barbara, at an IU football game, and his four children all went to IU for undergraduate or graduate school.

“I know this place; it’s in my blood,” Glass says. “I’m driven to be successful because this is literally where I live. My reputation is on the line because even if someday I leave this job, I won’t leave the community.” 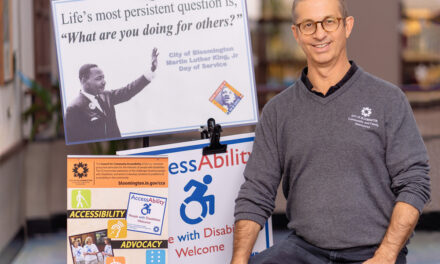