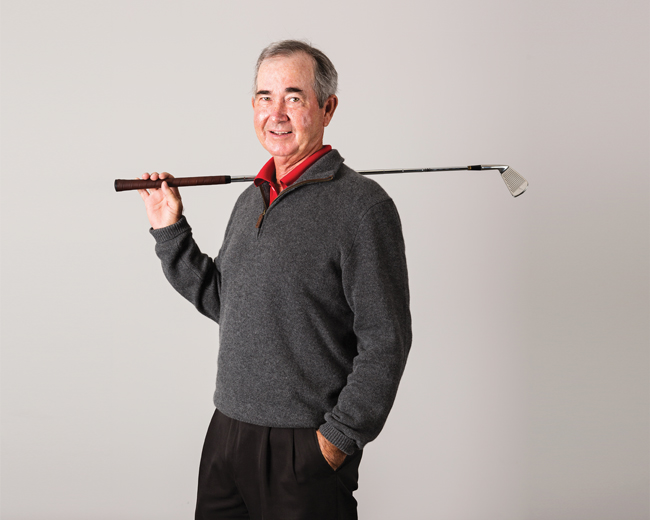 For most of his life, longtime Bloomington resident John Miller has gone by “Spider.” Now he sports a loftier moniker: “Captain.”

Last August, Miller was selected to head the 2015 USA Walker Cup Team in the competition that pits America’s top amateurs against their British and Irish counterparts.

Nicknamed Spider because of his boyhood penchant for climbing, Miller, 63, played for the U.S. team in 1999. He earned that honor by twice winning the U.S. Mid-Amateur Championships, the highest tournament for amateurs age 25 and over. Those victories brought Miller to the attention of the Walker Cup selection committee and landed him a ticket to Augusta National Golf Club, in Georgia, for the 1996 and 1998 Masters Tournaments.

Miller still considers playing for the Walker Cup the higher honor. “My goal was always to make the team,” he says. “Now being named captain is the end of the line for me, the greatest honor I’ve ever been given in golf.”

The North Vernon, Ind., native honed his golf skills working his way through Indiana University and relentlessly pounding golf balls at the university driving range. “I didn’t have time to play, so I just hit balls,” the 1973 graduate says. “I became a range pro. Every time I make a contribution to IU, I’m just paying it back for all those golf balls I hit.”

The local golf legend, who owns Best Beers, Inc. in Bloomington, has many stories to tell, but one of the most intriguing has nothing to do with golf. On July 4, 2010, he got a call from the U.S. Coast Guard, informing him that his plane, a small Cessna, had been recovered off the coast of the Bahamas. Miller didn’t even know it was missing from the Monroe County Airport.

It turned out that the plane was stolen by Colton Harris-Moore, a.k.a. the “Barefoot Bandit,” the teenager who went on a nationwide crime spree in 2010.

Miller’s reaction was not what you’d expect.

“I told the courts, ‘Don’t put him in jail because of me. Give him a job.’ That was conveyed to him, and since that time we’ve been corresponding. You’d be surprised at his penmanship.”

Giving a young man a second chance is much like the game of golf, says the new Walker Cup captain. “Once that ball leaves your club face, there’s nothing you can do about it. You have to look forward to the next stroke, not the one you just hit. When things happen you have to go forward, not backward.”