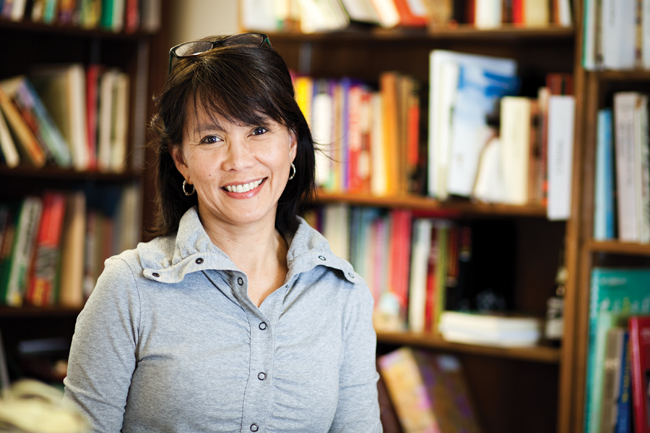 Arriving in Bloomington in 1993, Melanie Castillo-Cullather was a disoriented newcomer and a newlywed with a serious case of culture shock.

Born and raised in the Philippines, she came to the city by way of Washington, D.C., with her husband, Nick Cullather, who had landed an assistant professorship position in Indiana University’s history department.

“I wondered, ‘Where am I?’ The Midwest was very alien to me,” remembers Castillo-Cullather.

More than 20 years later, she is one of Bloomington’s ultimate insiders: a tireless networker who makes newcomers feel at home in the community. Since 1999, she has served as director of IU’s Asian Culture Center (ACC), welcoming thousands of Asian American and Asian international students to our town. Under her leadership, ACC produces close to 100 programs and events annually — from small, intimate discussions in the center’s homey East 10th Street headquarters to large cultural events like the annual Lunar New Year fete and the Holi Festival, a celebration of spring. After 15 years at the center, Castillo-Cullather still sees boundless opportunities to expand ACC’s reach.

“We have contact networks with alumni who are in the prime of their careers and want to give back. It would be great for us to be involved in domestic and international service learning,” she says.

While Castillo-Cullather infuses Asian graciousness with Hoosier hospitality at the ACC, she also has been a sensitive cultural diplomat in times of social conflict. In 1999, she had just started her job when Korean IU graduate student Won-Joon Yoon was murdered by a white supremacist on a rampage that shocked the nation. Castillo-Cullather facilitated the university’s effort to fly the Yoon family to Bloomington, and then organized the memorial service, which was attended by then-Attorney General Janet Reno.

“That unfortunate event made it clear that the ACC needed to have a presence in the community, not just on campus,” says Castillo-Cullather, who has subsequently been at the forefront of campus and community relief efforts for international disasters including the Indian Ocean tsunami, the Haiti earthquake, and Japan’s nuclear reactor crisis at Fukushima Daiichi.

In her rare free time, Castillo-Cullather, 50, who is the mother of two teenagers, can often be spotted running the streets of Bloomington. After taking up the sport in 2007, she has completed seven marathons and plans to run her eighth in Big Sur, Calif., in April.